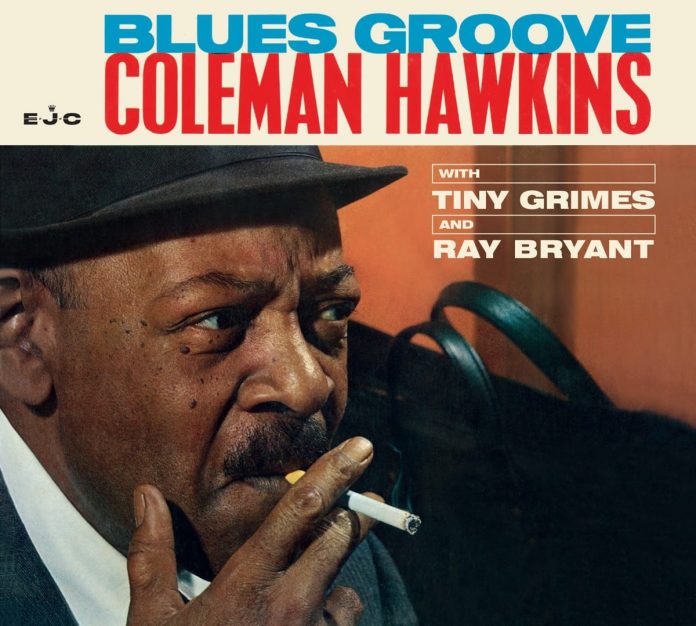 It is impossible to overstate the importance of Coleman Hawkins in the history of the saxophone in jazz. He was the pathfinder, standard-setter and, until the arrival of Lester Young, the musician toward whom all other saxophonists bowed their heads (and in many cases shamelessly copied).

All this said, he is not the predominant soloist here. This CD combines an album originally released under the name of guitarist Tiny Grimes, to which has been added a track, Tiny Bean, that was incomplete and hence omitted from the LP, and a further three tracks with the saxophonist, guitarist and pianist in company with a different bassist and drummer.

As the album title announces, this is the blues, a form with which the principals were always at ease. The first track, almost 18 minutes long, opens with seven minutes of solo guitar, all of it inventive and engaging. This is followed by a similarly long solo from Hawkins. The sound he conjures from his instrument is always rich and deep; barrel-chested as the cliché would have it. The rest of Marchin’ Along is Bryant’s. Thus, the direction of the session is set out clearly.

The three principals are in fine form, at ease with the music and comfortable with one another. Also, they clearly enjoy the opportunity to expand far beyond the recording limits of earlier years. On the other tracks from this session there are also solo moments from flautist Musa Kaleem (aka Orlando Wright), while the bassist and drummer provide solid and swinging support.

The tracks from the slightly later session bring in Roy Eldridge, always inventive, robust, energised and, another cliché, fiery. The change in bassist and drummer brings a stronger, yet always subtle presence.

Perhaps needless to add, the sound quality is first class, as was everything set down in Rudy Van Gelder’s recording studios. Included in the packaging is Ira Gitler’s original liner note, which is, of course, centred on Grimes, and hence worth reading as the guitarist has been unfairly overlooked in recent years. There is also a new note by Anthony Weiser, which concentrates on Hawkins and Bryant, thus fairly redressing the balance.

Altogether, there is nothing not to like on this excellent reissue, which should appeal especially to fans of front-rank jazz guitar.

Jazz Journal - 30 June 2021
This performance proved conclusively that Surman's recent preoccupation with synthesisers, complex overdubbing techniques and detailed composition has in no way impaired his talent for passionate improvisation. His soprano, baritone and...