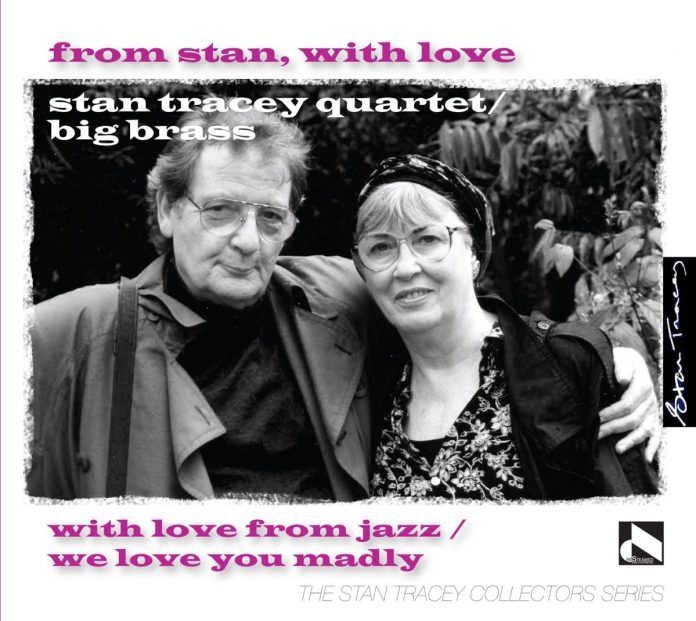 Another thoughtful reissue from Clark Tracey, Andy Cleyndert and Resteamed Records, this couples the quartet’s With Love From Jazz with the big band’s We Love You Madly.

Coming two years after Under Milk Wood it has always presented the temptation, unfairly, to compare the two recordings. However, this holds up well, a clear extension of ground laid down. In many parts it equals its predecessor, especially when listening to tracks such as Undercover Lover, Amoroso and Three Times Blueser.

Various factors might have contributed to With Love From Jazz not being recognised as fully as it deserved, including the relative lack of promotion and a difficult relationship between Stan Tracey and record producer Denis Preston. Returning to it after all these years, it’s the freshness and force, the threat of quickfire tempos falling over the precipice, the confidence exuded by all four players and of course, the rapport between Tracey and Bobby Wellins that are immediately noticeable. The combination of these two on Amoroso, Only More So a case in point.

All the players are given opportunity to make a mark: Wellins’ mixture of haunting fragility and expansive assertion, methodically constructing his solos; Tracey’s fragmentation and strikingly individual chords; Dougan’s vigorous drumming. But it’s also the young, rapidly maturing Dave Green who impresses. The interlude with Wellins on Two Part Intention shows how readily he was taking on board his role, as does the way he forms the bridge between piano and tenor solos on Lovers Freeway, as Tracey’s piano gathers momentum.

The second CD, We Love You Madly, is the tribute to Duke – never far away in the Tracey canon – all Ellington/Strayhorn compositions and Tracey’s own title track. Starting with Blues With A Feeling, in which all the soloists get a blow, each number has a featured musician, each putting their individual stamp on it. There’s the quicksilver, uncategorizable Tony Coe (Lay By), the woody resonance of Acker Bilk, (bowler) hat tipping to early Duke (Creole Love Call), and the soaring balladic approach of Joe Harriott (In A Sentimental Mood). No matter what the stylistic persuasion, all had Tracey’s respect and admiration and each fits into the Tracey conception of Ellingtonia.