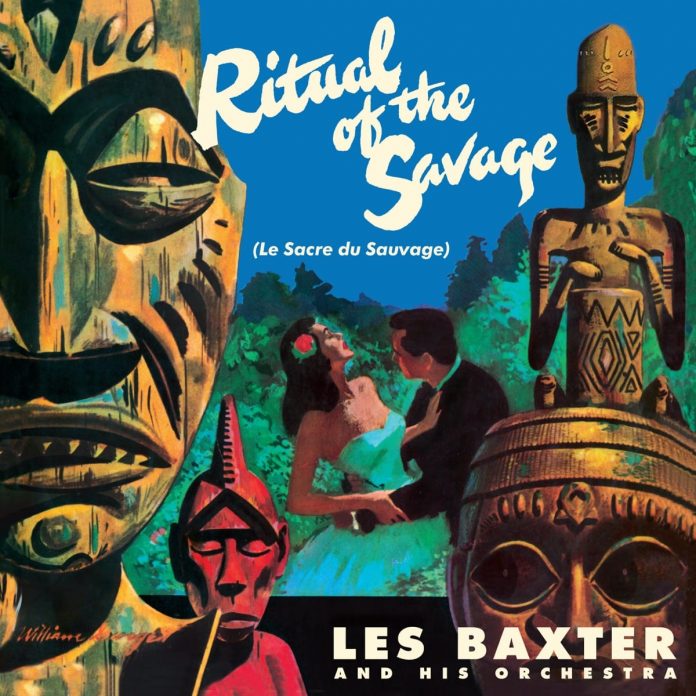 Music, Boethius reminds us in his sixth-century De Institutione Musica, can serve both to ennoble and to degrade. One wonders what the eminent philosopher might have made of both the content and the (unimprovably tacky) cover art of this early 1950s Tinseltown technicolor “triumph” from American composer, arranger and conductor Les Baxter (1922-1996). Equally, one wonders if Stravinsky, who moved to the USA in 1939, ever heard Ritual Of The Savage – and if so, what he thought of the tribute the album’s subtitle offered to his ground-pulverising Rite Of Spring from 1913.

One of Capitol Records’ biggest-selling items and a founding classic of so-called “exotica” (the ostinato piano plus swelling and swooping strings piece that is Quiet Village would later be popularised by Martin Denny, the godfather of the “exotica” genre) Baxter’s original work of 1951 is presented here on striking yellow vinyl, with later tracks from the 1955 edition plus the further bonus items Simba and Wotuka.

Tightly arranged and cleanly executed, the music mostly stays in the easy-listening category, projecting a primitivism as fanciful as it is lurid. The risible sleeve-fantasy note – e.g., “ Do the mysteries of native rituals intrigue you . . . does the haunting beat of savage drums fascinate you?” – suggests the sort of voyeuristic experience which musician and writer David Toop has caught best. Baxter, says Toop, “offered package tours in sound, selling tickets to sedentary tourists who wanted to stroll around some taboo emotions before lunch, view a pagan ceremony, go wild in the sun or conjure a demon, all without leaving home stereo comforts in the white-bread suburbs.”

And yet . . . Baxter was a literate, conservatory-trained pianist and composer and a sometime member of Mel Torme’s Mel-Tones. He worked with the great Peruvian coloratura soprano Yma Sumak on her extraordinary Voice Of The Xtabay, was associated with some early Nat King Cole hits and penned any number of film scores and hits of his own. Something of a chromatic visionary when it came to blending new and old sounds, he writes of The Ritual Of The Savage: “I got a little exotic there for a while. People ask me, ‘Where did it come from, did you go to Brazil? Cuba? Africa?’ Back then I never got further than Glendale. I really don’t know – it’s kind of like asking a jazz musician why he plays jazz. It’s just in my nature to do weird stuff.”

If you’ve relished the music of, e.g., Machito, Tito Puente or Chano Pozo, Art Blakey, Nana Vasconcelos or David Virelles, the “weird” stuff here is unlikely to raise much of a sweat, although the increased rhythmic and vocal impetus of a fair portion of the B side, especially the title track – the strongest piece here – should hold your attention. As for the suavely pitched arrangements, wordless choirs and general smoothed-out Afro/Latin aura . . . well, can the occasional guilty pleasure of an indulgent immersion in such sugared fantasies as constitute The Ritual Of The Savage really do you serious harm?

Back to Boethius – and over to today’s critical theorists, I fear.

Leon Nock - 18 July 2021
These early Bennett albums are presented in chronological order covering 1954 to 1959 and provide 51 tracks, all but a half dozen familiar to anyone who was listening seriously...