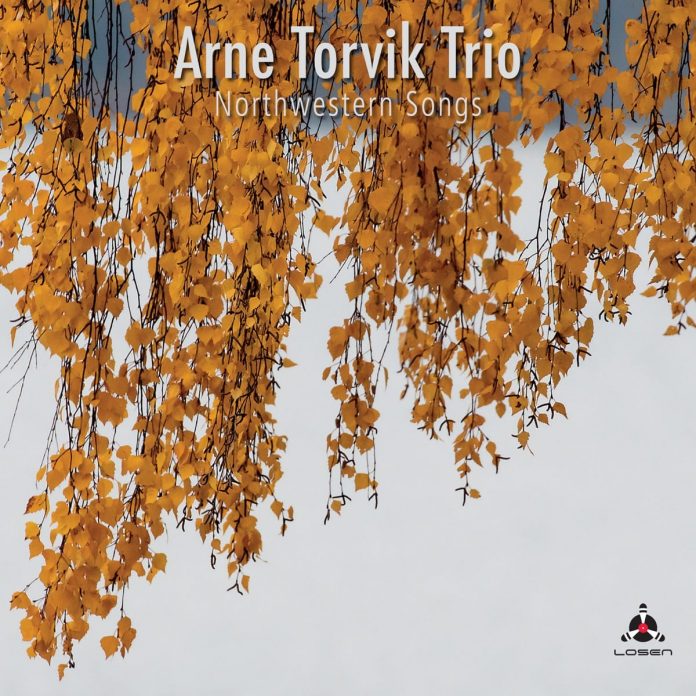 Norwegian pianist and composer Arne Torvik’s first CD album Northwestern Sounds (2017) featured him leading a sextet through a set of attractive and gentle melodies meant to evoke the scenery and atmosphere of that region of his country. It was well received by critics at home and abroad. One reviewer described its sound as ”something of a cross between Nordic and mainstream jazz” with a fusion of influences reflecting “cinematic qualities”.

Although the album failed to establish Torvik (b. 1981) as a (jazz) household name, subsequent Norwegian tours and appearances at jazz festivals brought him an appreciative and growing audience.

Northwestern Songs has Torvik in the empathetic and “conversational” company of bassist Tveite and drummer Vik (they met playing a gig in Oslo); performing six titles composed by Torvic, with one collective/improvised closer, Johan. As on Sounds, this album offers seamless, lyrical and mellifluous renditions of arresting compositions. Whether or not they conjure the landscape north of the Arctic Circle has to be left to the imagination of the listener. One title, Apent Rom, (meaning “open space”), was certainly meant to convey that effect.

Torvik’s pianistic touch hints at the possible influences of Bill Evans, Keith Jarrett and Brad Mehldau, but brings with it an original and intriguing imprint. If some of the pieces are slightly soporific, others – try the opening Compromise or Iver (after a ruminative piano/bass beginning) – have a subtle but insinuating rhythmic pulse. Throughout, the trio display empathy and inventiveness – particularly evident on the aptly titled Psalm, introduced by Tveite’s solo bass, followed by a delicate and moving solo by Torvik, interlaced with subtle shadings by Vik and Tveite.

Not Nordic noir, more Nordic semi-cool, and not perhaps to everyone’s taste, but definitely deserving of respectful attention.