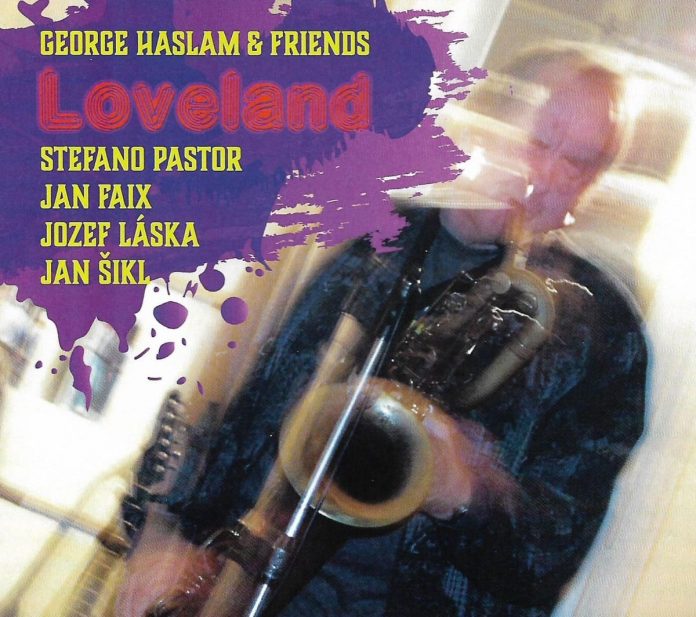 Apparently this is the penultimate release by SLAM, George Haslam winding things up in May to pursue other ventures (see What’s New, 29 March). His commendable policy of including lesser-known musicians is reflected in this CD, taken from his tour of the Czech Republic in 2010. It’s a live recording, only recently surfaced, made at a small cellar bar.

The first track, Waiting, has Haslam’s unaccompanied introduction on tarogato, a clarinet-like instrument from Eastern Europe giving a mellow sound with a wide range. Creating slowly circling patterns, he is joined by the other instruments and whilst this gives an attractive folkish feel, the ensuing free-for-all and Jan Faix’s sustained use of synthesizer creates a denseness which verges on the claustrophobic at times.

The long track Landing has a relaxed passage of synthesizer, Stefano Pastor on kalimba (a type of thumb piano) and unobtrusive percussion before Josef Laska’s bass and Haslam’s baritone appear. The baritone seems slightly incongruous in this, its purer sound not resting easily with, then being subsumed by, the conglomeration of the others. The quieter passages work effectively though in creating a sense of menace, Faix adding his melodica – at times harmonica-like – and Haslam having more space. Generally, the piece doesn’t benefit from the synthesizer and electric violin, the latter lacking clear definition except when reaching high notes, when it seems shrill. Similarly, Pastorale is heavily electronically dominated, despite the title.

However, the turning point for this listener was Loveland. Laska’s resonant acoustic bass sets a mesmeric pulse, varying slightly, whilst Haslam, back on tarogato, explores and works around him. Further texture is created by violin and percussion, at times trance-like, before Pastor’s violin moves to the fore and Laska’s bass makes further impressive manoeuvres. Supported by the busy drum work of Jan Sikl, it gains momentum, Laska entering a more exploratory phase before briefly laying down a walking-bass line which Haslam and Pastor follow.

A further bonus lies in the final track, Whither Tomorrow, on which the synthesizer uses deep bass notes, emphasised by cymbal touches, adding, perhaps appropriately, a cosmological effect – the music of the spheres. The full-blown synthesizer sounds like someone had slipped LSD into a cathedral organist’s tea. Haslam’s rich baritone creates parameters, ploughing an earthy furrow which Pastor’s electric violin follows, threatening to break into a melody.

I found the album treads a thin line between conviction and doubt, raising questions; but there’s enough to warrant further listens as it has moments of balance and effectiveness. Some I found extremely engaging, but then I like Haslam’s playing, although in this household the jury’s still out in the case of the electronica!