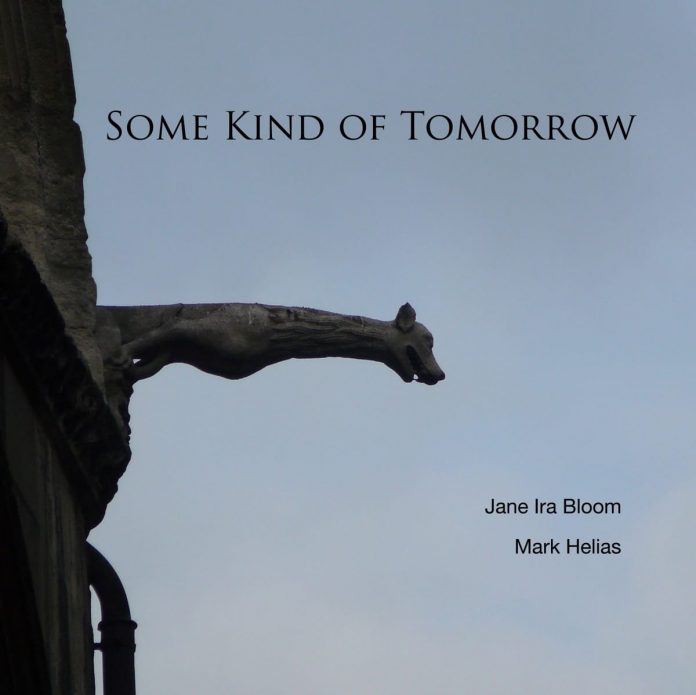 The Americans Bloom (born 1955) and Helias (b 1950) are seasoned, quality musicians who have worked together on several acclaimed recordings, such as the relatively recent Early Americans and Wild Lines: Improvising Emily Dickinson (both featuring drummer Bobby Previte).

Bloom has long been acknowledged as one of the finest of post-Steve Lacy players of the soprano, the poetry of her narrative-like approach to improvisation inflected by astute intervallic leaps and subtle modulations of tone and texture, rhythm and dynamics. Helias can count Dewey Redman, Ed Blackwell, Anthony Braxton, Gerry Hemingway and Marilyn Crispell among his many stellar associates: he recently posted a concert recording of Don Cherry’s NU band from their late 1980s tour of Britain, with Helias on board.

Some Kind Of Tomorrow was recorded under current Covid-19 restrictions. Introducing the music, Bloom writes: “Here are the improvised duets that bassist Mark Helias and I created in the spring, summer, and fall of 2020 on the internet. The thought of a world without a live, spontaneous musical connection was too hard to imagine and so we came to these sessions over the internet with an emotional thirst that’s hard to describe. The music is discovered in the moment in a way that I’ve never recorded before.”

The result is certainly special, with a fine sound-mix by Helias revealing every nuance of the proceedings – including the inhalation or exhalation of breath – in a programme which ranges far and wide, even as it sustains an overall unity of ethos and impact.

At over nine minutes, Roughing It is both the longest and most jazz-rinsed track here, full of classic finger-clicking phrases and down-home feeling. And the intriguingly titled Travelling Deep has some passages towards the end where Helias’s strong pizzicato lines are deliciously grooved, suggesting – in tandem with the propulsive strains of the latter stages of the title track – that there could be positive vibes ahead in this “some kind of tomorrow”.

At times – as on, e.g., Far Satellites and Star Talk – things can get eerie and abstract, reminiscent of a “spaced out” piece such as Most Distant Galaxy from Bloom’s earlier and excellent Art And Aviation with, a.o. Kenny Werner (p) and Kenny Wheeler (t, flh). What one might call a more inward poetry of distance – the quality which Gaston Bachelard characterised as “the intimate in the infinite” – is epitomised by the haunting Drift.

Here, underpinned in part by Helias’s spare arco figures, Bloom’s distinctive sound and phrasing are at their most patient, as intimate as they are exploratory and including some extraordinary passages of flute-like sonorities. Although the piece is very different, I was reminded of the compelling beauty of her economically turned solo on the concluding track, The Passage Of The Divine Bird, from Bobby Previte’s superb The 23 Constellations Of Joan Miró from a couple of decades ago.

Whether up and assertive or rubato and reflective (or both, as is often the case here) each piece is astutely cast in terms of dynamics and duration, the unforced “conversational” themes lucidly developed with Helias employing pizzicato and arco figures to equally judicious effect. At just over one minute in duration, the ironically placed First Canvas offers a modestly pitched yet resonant coda to a remarkable achievement, proof positive of the enduring creative power of the human spirit in these most testing times.

Fred Grand - 27 January 2019
The notion of Marciac patron and arch conservative Wynton Marsalis sharing a stage with Messrs Kühn and Portal may seem unlikely, but when Emile Parisien was named artist in...