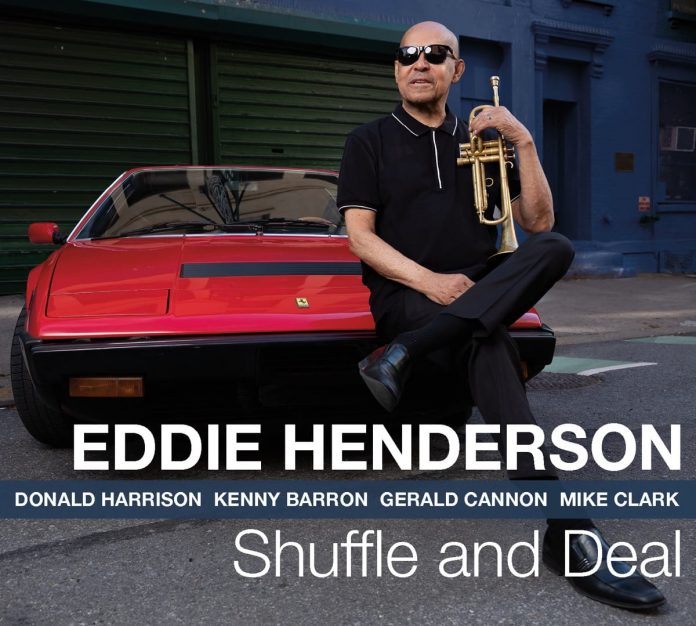 Eddie Henderson has a long and varied jazz history. He was nine when he saw Louis Armstrong perform at Harlem’s Apollo Theatre. His mother, a dancer at the Cotton Cub, took him backstage and Satchmo let him blow his trumpet. Fifty years ago he joined Herbie Hancock’s Mwandishi and was then hired by the likes of Art Blakey, McCoy Tyner and Max Roach. Over the years he’s performed and recorded with Pharoah Sanders, Gary Bartz, Stanley Cowell and numerous others.

The trumpet stalwart shows no signs of ageing – Shuffle And Deal was released on the eve of his 80th birthday. It’s his 26th recording as leader and it includes numbers from the repertoire of two members of his top-class quintet and two from family members.

The self-penned title track is a hard bop number with trumpet riffs recalling Benny Golson’s Blues March. There are two Kenny Barron compositions – the bebop Flightpath from Barron’s 2015 Flightpath album and the calypso-style Cook’s Bay from Spirit Song of 1999. Altoist Donald Harrison’s energetic track Burnin’ is from his Paradise Found album of 2000.

Over The Rainbow is one of four standards rearranged by Henderson, the others being God Bless The Child with tender muted trumpet; a lyrical rendition of It Might As Well Be Spring with sensitive brushwork from Mike Clark and a striking Henderson/Barron duet of Chaplin’s Smile. Henderson’s daughter, Cava Menzies, contributes the unusually metered By Any Means while the hard bop work out Boom, with high-octane drumming from Clark, is written by his wife Natsuko.

Henderson recalls that jazz started as dance music and says he wants to bring that element back. Whether it’s slow dance or quick dance – he’s certainly succeeded here.