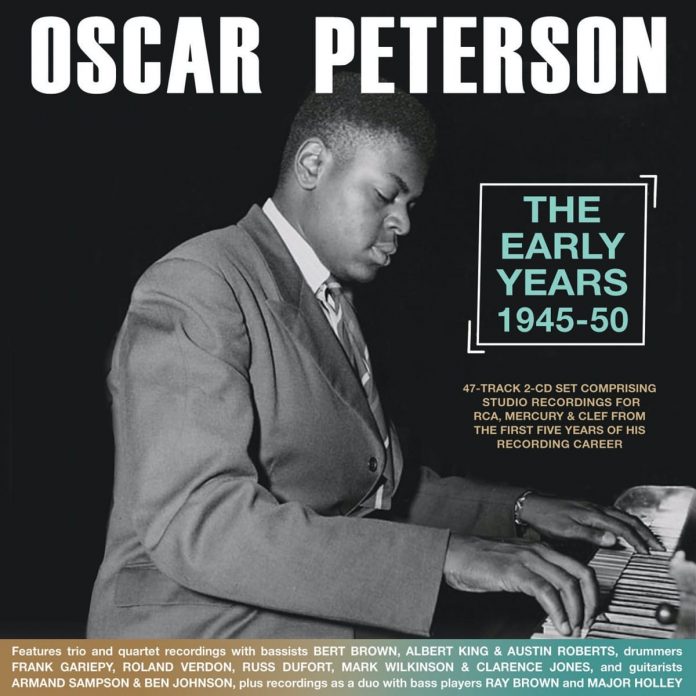 Most if not all of the titles on this compilation have been issued on various CD sets, including the excellent 2002 Proper Box anthology Oscar Peterson Genesis, with an informative essay by Joop Visser. This Acrobat confection contains 47 tracks featuring OP’s early recordings for the RCA, Mercury and Clef labels from the first five years of his long and distinguished career. Not even the most ardent Petersonian would argue that these early recordings are the equal of those dating from the early 1950s. But some of these performances – particularly the duo sets with Ray Brown and Major Holley – reveal a gradual maturation and refinement of his style and technique.

The frenetic early tracks with Bert Brown and Frank Gariepy are not among his best. The late Richard Palmer, Oscar’s most astute commentator, observed in a 1981 JJ article: “Limited in both melodic and harmonic ambition, these performances nevertheless betoken great potential, given that [he] was then only just 22.” In his autobiography A Jazz Odyssey Oscar recalls: “My first records were strong boogie-woogie renditions of old standards such as The Sheik of Araby and I Got Rhythm. I was not happy with the sessions musically, but looked on them as an important opening for me in the record field and grabbed it.” An entirely inappropriate boogie rendition of Dvorak’s Humoresque – hardly “an old standard” (although it was recorded by Oscar’s idol, Art Tatum in 1939) – confirms this temporary lapse of taste. But in a 1961 radio interview Oscar reflected that his boogie-woogie phase taught him “how to build an independence between the two hands insofar as what I played as a background with my left hand as opposed to the line of invention with the right hand.” Certainly, things begin to pick up with sensitive trio interpretations of such titles as Blue Moon, Time On My Hands, Sweet Lorraine and an exuberant Oop Bop Sh’Bam, with Oscar providing a scat vocal.

A qualitative (if not quite quantum) leap came with a series of duo recordings made with either Ray Brown or Major “Mule” Holley. More of these can be found on the Proper set mentioned above, but the 15 examples included here substantiate the point. The aptly titled Debut (a Peterson original) has a nimble piano solo underwritten by Brown’s pulsating bass line. Their 1950 recording of Tenderly is particularly interesting for its structural resemblance to the explosive Carnegie Hall trio performance (including Barney Kessel) two years later that propelled Peterson into national and then international fame. Oscar’s Blues (another Peterson composition) is perfectly paced and executed. A ruminative and delicate They Didn’t Believe Me, and a driving Lover Come Back To Me are definitely portents of things to come. Little White Lies has an alternately rhapsodic and gently rhythmic work out, with Holley providing appropriate backing. Jumpin’ With Symphony Sid (also with the metronomic Holley) is particularly satisfying.

Not, perhaps, an essential Peterson acquisition, but one which, if purchased, will provide some rewarding and instructive listening – latter-day Oscar in embryo.