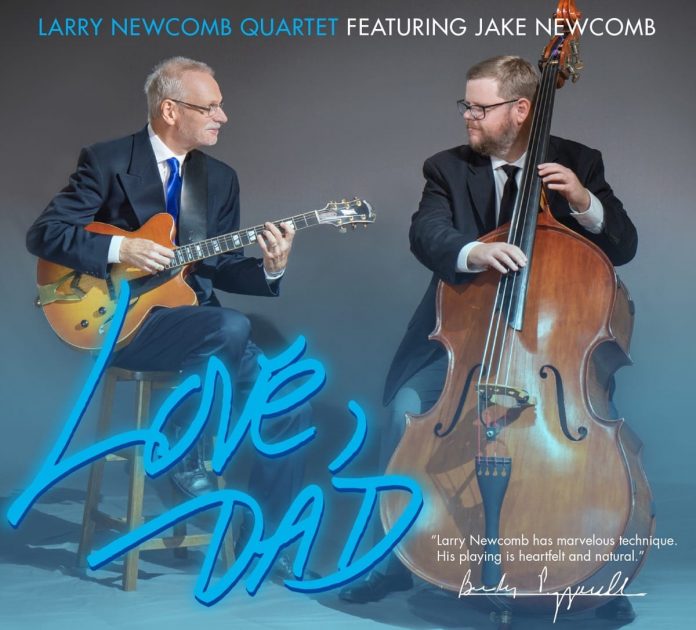 Judging by its title and the cover photo depicting Newcomb and his bass playing son Jake, the main sales pitch of this release is the inter-generational familial team-up. Nothing especially new here though; think of those other offspring who have graced their father’s records: Mercer Ellington, the three Brubeck sons, Alec Dankworth, Gabriel Garrick and Clark Tracey. But the real selling point, at least for guitarists, is of course the unalloyed virtuosity of Newcomb senior.

Whilst he has studied jazz guitar with the likes of Pat Martino, Howard Roberts, Jack Wilkins and Mark Elf, Newcomb has also clearly been influenced by Wes Montgomery as evidenced by the shimmering octaves he employs on tracks such as the self-penned Essential Messengers and Soirée. There’s a nod to Monty Norman’s famous James Bond Theme on P.F. Sloan and Steve Barri’s quirky Secret Agent Man. But, as would be expected on such a straightahead recording, there are some timeless standards such as Nacio Herb Brown’s evergreen You Stepped Out Of A Dream and Jerome Kern’s sprightly The Song Is You.

As with the other five Newcomb-composed numbers, the title track is elegant both in arrangement and execution and in common with all the titles here, the recording quality is superbly well balanced. Whilst this is by no means a ground-breaking session – nor is it intended to be – it is, nevertheless, executed with considerable skill and panache.

Barry Witherden - 27 January 2021
In 2018 I enthused in JJ’s pages about this band’s first release, Svårmod Och Vemod Är Värdesinnen, and am equally struck (an appropriate term) by this follow-up. If you...