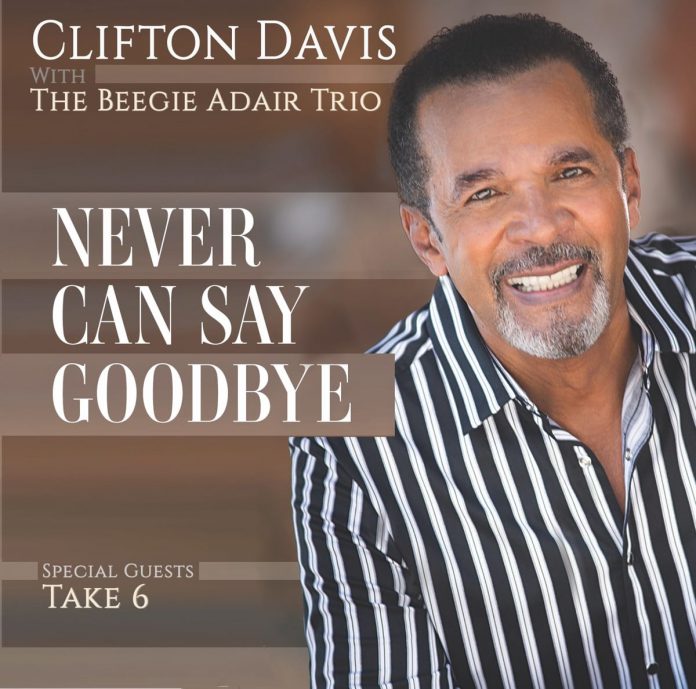 Never Can Say Goodbye is the appropriately titled jazz debut album of American actor, singer, songwriter, author and minister Clifton Davis, whose 50-year career includes starring in numerous Broadway musicals, US films and TV series and fame as the writer of the Grammy-nominated smash hit Never Can Say Goodbye, recorded by The Jackson 5, Isaac Hayes, Gloria Gaynor and The Communards.

The singer is joined by the best-selling Beegie Adair Trio for a 12-song set which includes three Davis originals and one co-write by Adair and Lori Mechem (founder of The Nashville Jazz Workshop with her bass player husband Roger Spencer, who also appears here), the remainder being standards by composers including Frank Loesser, Henry Mancini, Jerome Kern, Oscar Hammerstein II, Johnny Mercer and Sammy Cahn.

The album’s mood is set by a loping take on Loesser’s I’ve Never Been In Love Before, with Davis’s effortless crooned vocals preceding Adair’s playful piano passages over pleasant string accompaniment. The title track is taken slowly, with understated piano and strings providing the perfect foil to the singer’s honeyed tones and the dreamy backing sounds of vocal group Take 6. He is joined on a delightful rendition of Mancini’s classic Two For The Road by Adair Trio vocalist and manager Monica Ramey, whose delicate voice soars alongside that of her partner, while Adair once again contributes a tasteful, low-key piano solo. There is a silky take on Kern and Hammerstein’s The Folks Who Live On The Hill, while Mark Kibble’s fine vocal arrangements colour Davis’s own Swept Away, and Roger Spencer provides a feisty bass solo on Mercer’s Too Marvellous.

The music then veers into Latin territory, first with the laid-back Começar De Novo, then more forcefully with Sergio Mendes’ samba workout Somewhere In The Hills. Delivered with Davis’s inimitable smoothness, it also features Chris Brown’s resonant opening drum roll and taut percussion alongside Spencer’s rumbling bass. Minha Alma, Adair’s co-write with Mechem, continues the Latin theme, as the singer adopts a lower tone over the pianist’s omnipresent keyboard and Kevin Toney’s string arrangements. The album closes with another Davis original, Leaving It Up to You, which speaks to the singer’s relationship with God. Like all the tunes here, this is pure velvet.

While its gentle touch sidelines improvisation somewhat, and while it’s true that Davis has drawn on the Great American Songbook, already mainstream, and made it even smoother, almost to the point of easy listening, this is not to criticise: the singing, instrumentation and arrangements here are of the highest standard, delivering a classy collection of enjoyable, professionally performed Tin Pan Alley perennials. Fans of beautiful melodies and intelligent lyrics should be in Seventh Heaven.