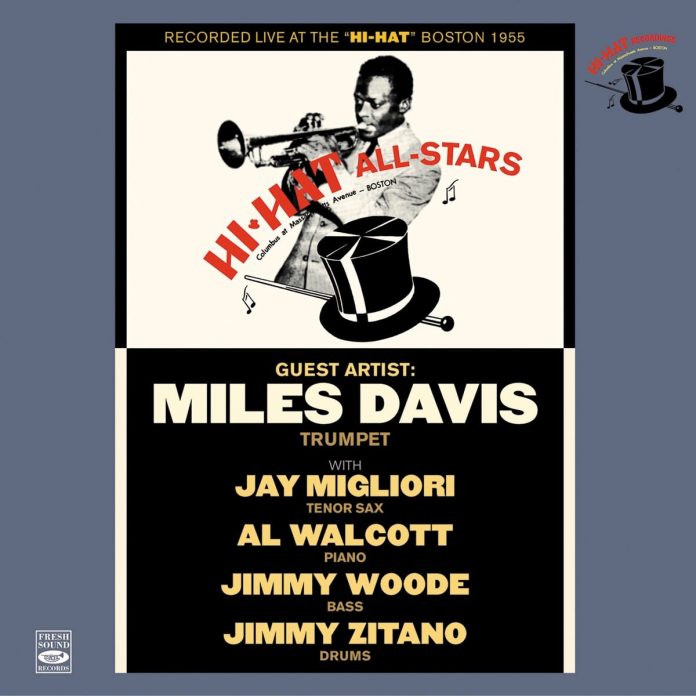 Fresh Sound give the date of this recording as 1955, and Miles did play at the club in March of that year. But Jimmy Woode joined Duke Ellington in January 1955 and although Tom Lord’s discography tentatively offers February 1955, it suggests that the recording might have been 1953.

To me, the state of Miles’s playing would confirm the earlier date, but this opinion could be influenced by the abrasive and slightly distant sound of the original tape. Due to mike placement the piano chording is often too prominent, but Migliori is well recorded and plays very well, if sometimes in too much of a hurry for comfort. Miles was meticulous about his albums and, although it’s a bit of history, he probably wouldn’t have let this one out if he’d had a choice.

Boston’s Hi-Hat was one of the earliest club/restaurants to feature top jazz artists as guests, and the policy paid handsomely. With satisfying hi-fi Blue Note issues under his belt and, if the later date is correct, a recently formed quintet with John Coltrane, Miles moved into pole position amongst his contemporaries, and with such favourable circumstances made a huge impression on his growing band of new listeners.

There’s a preponderance of uptempos and the ballads, Darn That Dream and Alone Together, don’t have the relaxed elegance of studio classics like It Never Entered My Mind. But Miles’s long first solo on Well You Needn’t has him ranging all over the horn, whilst his second on the same number is his closest approach to studio form, notable for fearless ascents. Two of the tracks have missing endings. The three stars are for Miles, however, who dazzles on the final Tunisia. The All Stars are competent but without Miles would be ordinary.

Migliori went on to a distinguished career including with Kenton and Herman and some fine groups of his own.

Jazz Journal - 28 August 2020
On July 4th, at the Queen Elizabeth Hall, the Melody Maker staged a tribute to Louis Arm­strong for his seventieth birthday. Alex Welsh and the Band kicked off, and gave...