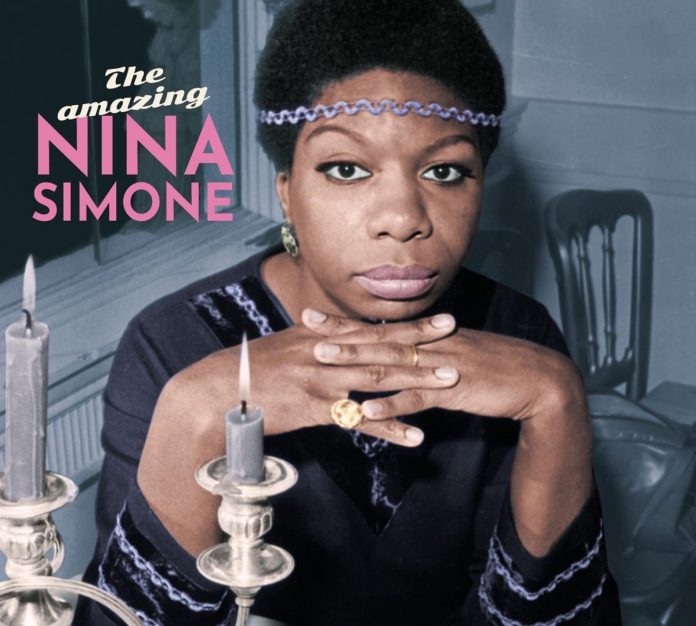 Nina Simone recorded her debut album Little Girl Blue in 1957 and she would not record again for two more years. In 1959, she signed a new contract with the New York based Colpix records, with whom she recorded her second album The Amazing Nina Simone (Colpix SCP407). This reissue by Matchball presents that original album in its entirety along with bonus material.

The album features Simone singing (and playing some piano) with an orchestra conducted by Bob Mersey. We now know that Simone had little control over what she could sing or record at this time in her career; although she did contribute the song Children Go Where I Send You. Colpix clearly had a marketing strategy for Simone and she had to fit within that. Matchball have also included four tunes from the same sessions which were not included in the original recording (including I Love You Porgy) as well as four more tracks that were issued as Colpix singles during the same period. These additions make some sense in terms of continuity and context, but I would have stopped at the original session recordings.

The unnecessary padding comes with the inclusion of a further three bonus tracks, including a live version of Nobody Knows You When You’re Down And Out and the inevitable My Baby Just Cares For Me, none of which have any relevance whatsoever to the original album. The inclusion of My Baby Just Cares For Me is both a cliché and inexcusable as it predates Simone’s second album by two years. It is not a great song and nor was it well liked by Simone; although she readily accepted the income stream it generated in later life when used by Chanel.

The album features new liner notes by Marion Scwartz, but it is the original liner notes that are more revealing of the era. The notes were written by Roger Caras and are a masterclass in selling an image of Simone to a predominantly white, middle-class audience. For example, “Nina is a jazz musician – she is a negro spiritualist – she is a women tormented by love – she is a Sunday school picnic. Nina is, in short, whatever the words and the music she is singing really mean.” If the implicit racism was not bad enough, we now know that Simone had serious mental health issues, we know that she never recovered from being denied access to classical piano training because of racial discrimination and we know that she was subject to emotional and physical abuse for long periods of her life.

Her life was a mess from beginning to end and yet despite that she managed to leave the world a magnificent legacy of music. Like many other troubled artists (Van Gogh, Hemingway, Orwell etc.) Simone managed to turn hurt into creative brilliance and pain into great art. I sometimes wish Simone had gone onto to be a great classical pianist and had not had to endure the life that she led. But then the world of blues, jazz, folk and gospel music would be a poorer place without her. I do not personally like what Matchball have done with this reissue, but I am grateful to them for reminding me what a great album it is.

Discography
Blue Prelude; Children Go Where I Send You; Tomorrow (We Will Meet Once more); Stompin’ At The Savoy; It Might As Well Be Spring; You’ve Been Gone Too long; That’s Him Over There; Chilly Winds Don’t Blow; Theme From “The Middle Of The Night”; Can’t Get Out Of This Mood; Willow Weep For Me; Solitaire; I Love You Porgy; Falling In Love Again (I Can’t Help It); That’s All; The Man With A Horn; Since My Love Has Gone*; If Only For Tonight*; Nobody Knows You When You’re Down And Out*; Come On Back, Jack*; I Love To Love; Nobody Knows You When You’re Down And Out (Live)*; My Baby Just Cares For Me* (76.36)
Simone (v, p); Bob Mersey (arr, cond). New York, May 1958. *Bonus tracks recorded between 1957 to 1961.
Matchball 48029

John Adcock - 29 November 2020
The excellent Marcin Wasilewski Trio has been playing in its current form since 1993 and first recorded for ECM as part of Tomasz Stanko’s quartet in 2001. Over the...