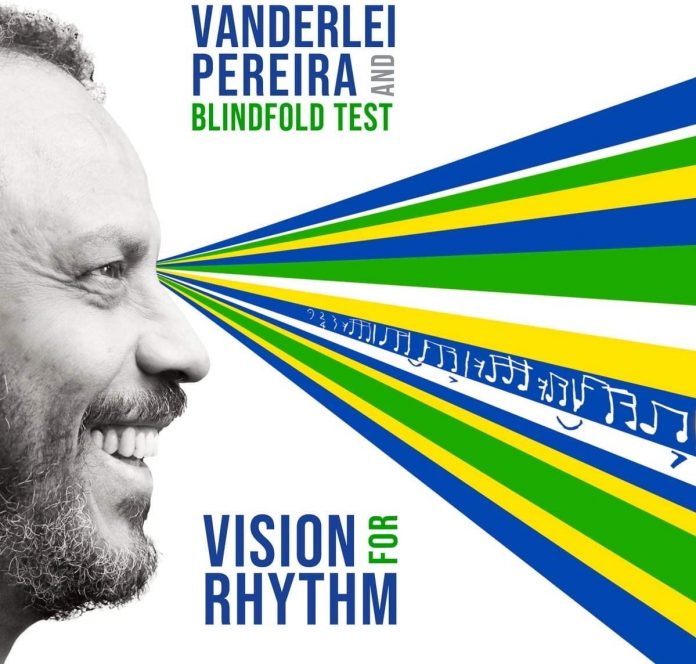 The name chosen by Brazilian drummer Vanderlei Pereira for his sextet acknowledges and confronts his handicap. Born into a musical family, he played drums professionally from his mid-teens, including a six-year performance internship with the Orquesta Sinfónica Brasiliera. Suffering from inherited retinitis pigmentosa, his vision gradually deteriorated and, no longer able to read music, he moved away from classical to pop and jazz. Resident in New York from the late 1980s and now blind, he became and remains active on the city’s Brazilian music scene, performing live and on record with many leading artists.

His sextet consists of woodwinds and a wordless vocalist, backed by a rhythm section. Apparently, in live performances, when playing some of the more complex works, the rest of his band wear blindfolds, ostensibly to “level the playing field” for the leader. With the exception of Deanna Witkowski, the other members of the group heard on Vision For Rhythm, Vanderlei’s first album as leader, are perhaps not well known internationally, but all are skilled musicians.

In interviews, Pereira has made clear that, although it took time, he has accepted his blindness and rejects pity, insisting that with his music and his own way of seeing things he has all that he needs.

Clear from the concept and the instrumental line-up, this music is intensely rhythmic, drawing as it does upon the many dance forms originating in Brazil. Some of these are in a relaxed, swaying tempo, others lively and exhilarating. There are many solos from flautist Jorge Continentino, tenor saxophonist Rodrigo Ursaia, and pianist Deanna Witkowski, while Susan Pereira’s wordless vocals are effective both in solos and when blending with the ensemble.

Throughout, Vanderlei Pereira’s musical skill is exceptional, the final track being a two-minute solo demonstration of his remarkable dexterity. His debut album will appeal to all who enjoy Latin American jazz.

Dave Gelly - 31 August 2021
No doubt this is aimed at those of us who hang about at the end of a Woody Allen movie, getting in people's way as the credits roll. All...