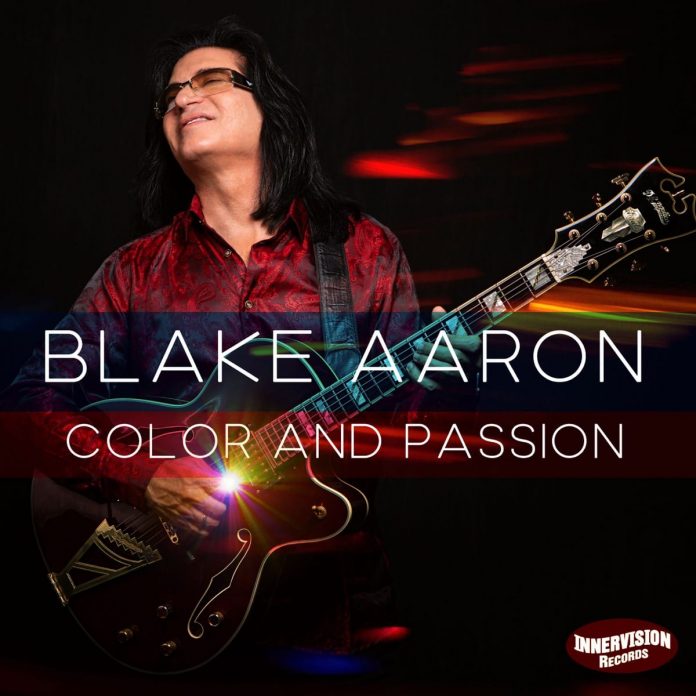 Blake Aaron is a Los Angeles based “smooth jazz” guitarist. I get that out of the way first so that those with an aversion to smooth jazz can move on. For those who are interested in talent regardless of genre – read on. When not performing as a solo artist, Aaron is a guitarist and composer on a number of American TV shows. For the last 14 years he has been resident guitarist on MADtv and has composed a number of theme tunes for shows starring Ben Stiller, Faye Dunaway and others.

His debut release, With Every Touch (2001) received some success in the smooth jazz charts. This album was followed with Bringin’ It Back (2004) and Desire (2007) – both of which had both indie and Billboard chart placings. Aaron also hosts a syndicated weekly radio show for station KSBR with guests that have including Nils Lofgren, Alan Parsons and Kenny Loggins. As a guitarist Aaron has worked with a lot of artists including Mary Wells, The Drifters, Carlos Santana, Bobby Womack and many others. In short, Aaron is a talented artist who is at home working with other talented artists.

Colors And Passion fits, unashamedly, full square in the smooth jazz box. The style isn’t an popular as in the 90s and 00s, but it still has its fans here in the UK. In America, the diversity of radio and streaming channels ensures the brand remains relatively popular over there. Of course, we know it has more than its fair share of critics. It’s the sort of music Van Morrison was referring to in the lyrics of his song Goin’ Down To Monte Carlo when he writes “playing in the background in the restaurant some kind of phoney pseudo jazz”.

However, let us not forget that the “smoothing” of jazz was a deliberate decision taken by record companies in America to invigorate declining jazz sales in the 1960s, as well as to reverse the decline of jazz being played on the radio due to its domination by the new wave of pop, rock and soul music. At the same time there was an increase in popularity of a new style of “easy listening” music as well as the arrival from Brazil of bossa nova. It all added up to an eclectic mix and an opportunity for record companies to get their artists to change direction. You could argue that Stan Getz, Wes Montgomery and (later on) Grover Washington Jnr and George Benson are examples of serious jazz musicians being told to “smooth” it up or hang it up.

Be in no doubt, however, about the musicianship of those who’ve been involved in smooth jazz, including Bob James, Peter White, Larry Carlton, Earl Klugh, Lee Ritenour and many more younger musicians. I have seen a good number of these artists in concert and they can definitely play – usually to audiences that most jazz musicians can only dream about . Maybe Frank Zappa had a point when he described “jazz as the music of the unemployed”. If smooth-jazz artists can fill an arena and sell CDs, good luck to them.

Colors And Passion holds no surprises. It is well-composed music played by talented musicians. It doesn’t challenge but nor does it offend. It fills the gap when you want something to listen to that fits in with your mood – be it driving or relaxing. It isn’t going to win a Grammy, and nor will it win over sceptics. But it does a really nice job of entertaining. Smooth jazz does not preclude intelligent improvisation or good solo playing, and Aaron shows off his guitar talents to good effect. I wish I could tell you more about the other musicians on the album but as is often the way these days when record companies supply digital review material, they fail to provide even the most basic recording information. Nonetheless, give it a try – it won’t bite and you may be pleasantly surprised.

Elliot Marlow-Stevens - 21 August 2020
Saxophonist Stanley J. Zappa’s release Muster Point features a range of free improvisations from a small ensemble, made up of both studio and live recordings, the latter taken from...

Jazz Journal - 31 May 2022
I doubt if I was the only one in Croydon's Fairfield Hall on Thursday, February 10 this year who felt proud to hear the National Anthem. The rest of...