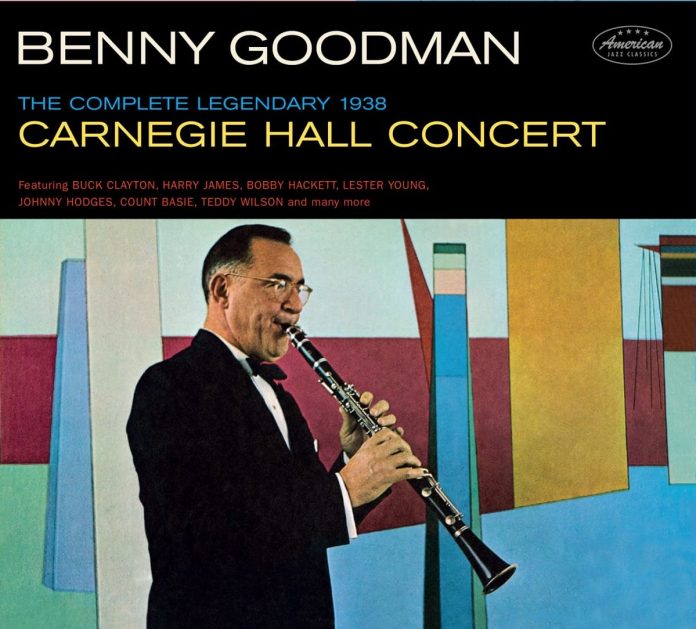 Much has been written about this night at New York City’s Carnegie Hall and for once the use of the word “legendary” is not a PR exaggeration.

That fans of big band jazz can hear the music of that night rests on chance. Albert Marks, husband of Goodman’s former singer, Helen Ward, took it on himself to record the concert, using only a single overhead microphone. He later handed the resulting acetates to Goodman who put them in a closet and forgot about them for more than a dozen years. When they were found in the early 1950s, the recordings were immediately transferred from the acetates and, the recording industry having moved on, they were released on the new-fangled long-playing records. Ever since, they have been available in one form or another and no matter how many times they are heard, there are still moments of excitement and awe.

The excitement first comes when, after a slightly shaky start, Gene Krupa makes an explosive call to arms, the audience cheers, and things begin to gel. There are still moments of uncertainty – some of the tempos chosen for the trio and quartet numbers are maybe a little too fast (although Stompin’ At The Savoy is a relaxed delight), the “history of jazz” medley is uncertain, but this is all unnecessarily hypercritical.

The jam session, sometimes drastically edited in earlier releases, brings on to the famous stage some of the finest jazz masters of the era.

Perhaps most memorably, the full orchestra signals the planned end of the evening with a performance of Sing, Sing, Sing. To steal a passage from a book of mine: “It didn’t much matter if, musically speaking, the show was stolen during this tune by … Jess Stacy, who performed a piano solo of startling originality and grace in the midst of the thundering drums and screaming brass.”

There follow two encores, sometimes omitted on previous releases, a not entirely unjustified action as they are inevitably anti-climactic.

In some ways, this concert marks the close of a chapter. Goodman was unhappy at Krupa’s popularity and the drummer soon left, launching his own band just three months later. But none of the aftermath matters. That night in January was a milestone of the swing era, a record (in both senses) of the importance of the Goodman band, and a lasting aural image of men and music that is as vital and exhilarating today as it was 80 years ago. Indeed, nowadays Sing, Sing, Sing is almost commonplace in the world of TV advertising.

On this release, the concert is followed by a complete Camel Caravan broadcast made two nights later. This holds interest for Goodmanophiles as it includes the quartet playing Honeysuckle Rose, a song that does not appear among the group’s studio recordings, as well as a classical work. Altogether, this release is of musical and historical importance and is, of course, very warmly recommended.