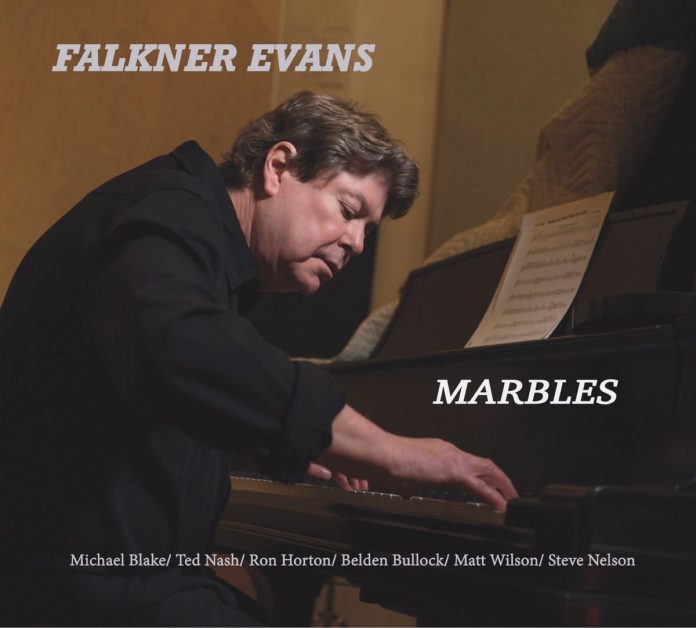 Any group with three or more horns usually puts plenty of emphasis on organisation in some form or other. That certainly applies to the treatment of his tunes here by Falkner Evans, not over-orchestrated but clearly deserving to be called arrangements.

Originally from Tulsa but based in New York for over 30 years, Evans began with a handful of albums as leader of a trio. He added a couple of horns to The Point Of The Moon from 2011 and now emerges again with a sextet. The way he approaches the music suggests a definite interest in organisation and one quality that shines through is excellent taste.

Apart from the brief rundown of an Ellington stand-by right at the end, Evans wrote and arranged all the tunes. If none strikes me as truly outstanding, they are far removed from the anonymous exercises one often encounters. Routines come across as pleasantly relaxed, ensemble passages not overwritten while Evans often gives one or other horn responsibility for presenting part of the melody.

All three of them stand out when taking the spotlight as soloists and there is a nice contrast between the fast-fingered Ted Nash and the somewhat more earthy Michael Blake. Tasteful can again be used to describe the piano solos, laid-back and never going on too long. Though there is no obvious pianistic tie-up, worth mentioning some of the tunes have fleeting passages that remind one of Thelonious Monk.

As is common these days, I could have done with a touch more old-fashioned cooking. That aside, warmly recommended.

Fred Grand - 19 December 2020
Hunstville was established in 2006 and its epic post-rock soundscapes take in a very catholic range of influences. From the skewed dustbowl Americana of Jim O’Rourke and David Grubbs’...