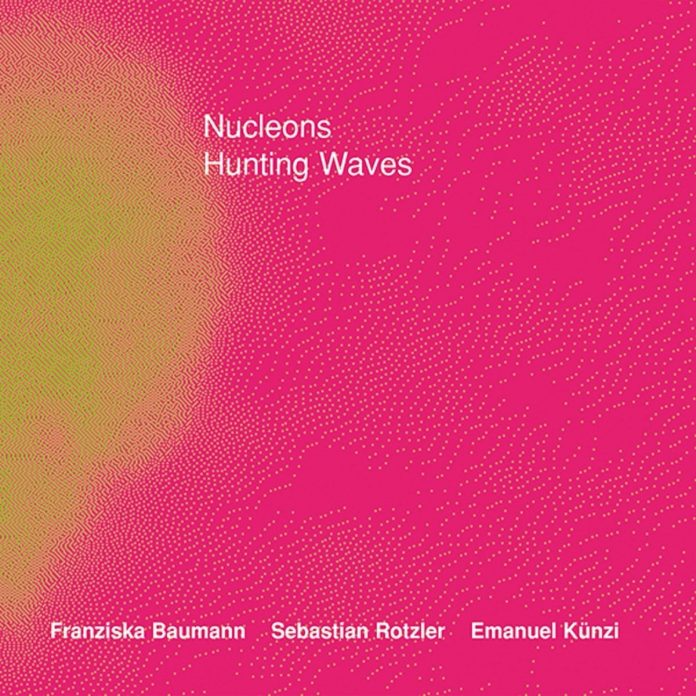 Okay, so the trio of voice, bass and drums is hardly overused even within the wide open fields of free improvisation, but unity of purpose is a major characteristic of this set. A practical consequence of that is compelling music which, in a way entirely its own, has something of the Watts / Stevens line-up of the Spontaneous Music Ensemble about it. In both cases low volume doesn’t equate with low creativity, in fact quite the opposite.

As Gerry Hemingway writes in his digipak note for this set it’s sometimes inexplicable why three creative inputs go together, and whilst there’s no particularly stark example of the pertinence of that comment in this set, the lengthy Hunting Quarks gives it substance. A kind of precarious balance is struck for the duration of the piece, while the suppression of ego and the avoidance of flights rhetorical and otherwise ensure that the music is compelling.

Throughout its seven and a half minutes Subatomic Whisperings is a model of agreed restraint. Baumann hints at language without ever resorting to it, Rotzler, again with the complete absence of rhetoric, shows his command of augmented technique, while Kunzi’s periodic bluster almost tips the music over into abstract parody.

These collective avoidances serve to place the music in the context of a tradition the most overt characteristic of which is a kind of physical longevity, as opposed to the maintenance of a tradition in which the roots are constantly recycled, as it were, with no more than ever increasing refinement to distinguish between one generation and the next.

I described Dahlen’s 2018 album Clocks as “a dark musical hinterland of quite stunning beauty” and having lived with it for a couple of...
Read more
Audio Reviews

This is straightahead jazz but with a distinct edge. The Europe-based KUH Trio take their acronymic moniker from the first letters of their respective...
Read more
Audio Reviews

This is a quartet that pulls off something that's uncommon these days, namely covering a lot of ground while at the same time retaining...
Read more
Book Reviews

If anyone has a stronger claim to being a missing link between David Bowie and Bessie Smith than Dana Gillespie then I don't know...
Read more
Columns

Between the ages of 65 and 72 the painter Claude Monet experienced changes in the way he perceived colour. At the latter age he...
Read more
Audio Reviews

Anyone who wakes up at 2 a.m. in a cold sweat and troubled by memories of Bobby McFerrin's anodyne ditty of the same title...
Read more
Audio Reviews

Here's a set in which some names from the contemporary jazz scene (or whatever husk remains of it in these pandemic days) make some...
Read more
Audio Reviews

Hyperactivity seems to be a growing trend in contemporary jazz, but oddly that hyperactivity rarely seems to go hand in glove with a sense...
Read more
Audio Reviews

Of these two is Fresh Sound's The Best Voices Time Forgot series one (Guyse) has a background which has largely been hidden from history,...
Read more
Audio Reviews

The territory mapped out by Bill Laswell and Material, Fred Frith and Massacre has been neglected for decades, but to a degree this album...
Read more
Audio Reviews

Here's a saxes, bass and drums trio going about some musical business with less rigour and sense of adventure than the likes of Rollins,...
Read more
Columns

Herbie Nichols might not have known much about marketing, but then marketing in his day consisted of not much more than a few trade...
Read more
Audio Reviews

Susan Tobocman vaults effortlessly over the void between superior pop and jazz, and takes songs by the likes of Lennon and McCartney and Jimmy...
Read more
Audio Reviews

Trumpeter Alessi is for me the outstanding soloist in this set of colourful yet in places gossamer-light contemporary jazz. Wolf Totem is the most...
Read more
Audio Reviews

I don't wish to idly boast but I'm rarely bamboozled by an album, so this is something of a rarity. The music ranges far...
Read more
Audio Reviews

To start with a general point, we have yet to experience the effect of the coronavirus situation on a label...
Read more
Features

Keith Tippett's recent passing sent me scurrying back to the percentage of his discography that I have on record; the exercise disclosed facets of...
Read more
Audio Reviews

Jan Tore Skramesto, the note writer for this one, urges the reader to regard this group as "five immensely talented young musicians falling in...
Read more
Audio Reviews

Here's a conundrum of such an order that even the idea of a title seems anomalous. The two repeated words refer to a notion...
Read more
Columns

It seems that many live music venues are staring into the abyss and the availability of the live stuff in the era of the...
Read more
Audio Reviews

Encouragement, like a great many aspects of life, can come from many quarters, and it's downright encouraging, not to say grounds for optimism, to...
Read more
Audio Reviews

Novoa seems to have made a comfortable home for herself in Fresh Sound's new talent roster and this is a good thing as her...
Read more
Audio Reviews

Glasser refers to what he sees as a never-ending struggle between anarchy and hierarchy in the notes on the double gatefold sleeve for this...
Read more
Audio Reviews

For yer actual jazz hack there are times when nothing but the kind of free empathy that comes only with musicians deeply listening to...
Read more
Audio Reviews

I was surprised to learn, and not in a good way, that a year has passed since I last reviewed an album by these...
Read more
Columns

Did the audience for Charlie Parker’s Boston, Massachusetts performance of 11 December 1952 feel that Christmas had come a fortnight early? I put the...
Read more
Audio Reviews

While a little nostalgia never hurt anyone, and given the state of this broken world seeking refuge in some version of the past, sanitised...
Read more
Audio Reviews

This package takes in Shayne's one and only album, which she cut at the age of 24 in 1956 with the backing of the...
Read more
Audio Reviews

In its mission to rescue long forgotten or never widely known or appreciated singers from undeserved neglect, the Fresh Sound label is now not...
Read more
Book Reviews

Lazy types might well have filed Henry Cow under progressive rock long before now, but in this instance as in so many others that's...
Read more
Audio Reviews

I don't know if Toots Thielemans and J.J. Johnson ever recorded together for Norman Granz, but if they did I can't help thinking the...
Read more
Audio Reviews

In a better world than this Carla Marciano would enjoy a far higher profile, as would her quartet which with this release has maintained...
Read more
Audio Reviews

Fresh Sound's continuing commitment to the Best Voices That Time Forgot is resulting in a series that not only crosses the divide between jazz...
Read more

Saxophonist-composer Nikola Bankov's band can play both tough and tender. At the start of Hope You'll Get It, August Korsgaard's synthesiser is coming in...

Recovering from a 2018 fire that destroyed a hundred instruments, the LA guitarist gives fascinating insights into the studio world, including work with Dave Grusin, Steely Dan and Pink Floyd, as well as dubbing for George Benson

This is probably the most powerful jazz record I've heard since 'The Individualism of Gil Evans', and one of Miles' most significant since 'Kind...