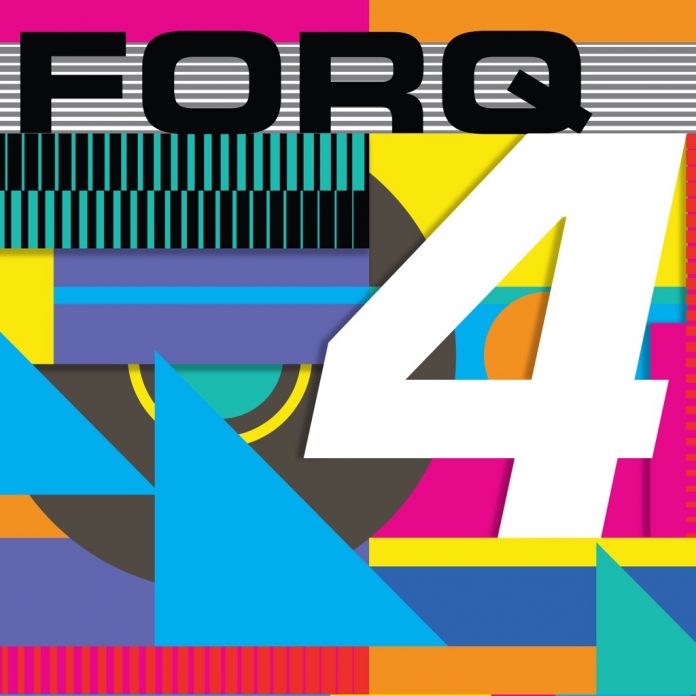 Forq was originally a spin-off from the phenomenally successful jam-band Snarky Puppy and its propitious lineage pretty much guarantees an audience. The group’s first three albums were released by SP’s GroundUp imprint and featured the Puppies’ charismatic co-founder Michael League. Thomas and McQueen continue to be part of the larger ensemble’s ever revolving cast, and Hey’s credits include work with Theo Bleckmann, Rudder, Jeff “Tain” Watts and a spell alongside David Bowie as musical director of the stage play Lazarus. Bassist Kevin Scott steps in for the departing League. A regular with guitarists Wayne Krantz and Jimmy Herring, he is perfectly suited to the group’s hard-edged brand of fusion.

Self-released in CD, LP and digital download formats, 4 was recorded over five days at the Power Station studio in New England. Rather like Wayne Horvitz’s fondly remembered Zony Mash, Forq can trace a line back to The Meters. Heavy echoes of Medeski, Martin & Wood’s “illbient” esoterica are also at play, and ostensibly there is much to admire. Yet if I have a certain reticence towards Forq’s music, it is simply because it too often feels overly self-ironic.

The set opens brightly with Mr. Bort, retro keyboard washes anchored by a cheesy P-Funk bass line. Lacking in drama, tension or any real sense of musical development, it nevertheless sustains its knowing smirk with no lack of skill. M-Theory signals something altogether more brooding, and the powerful exchanges between Thomas and McQueen are among the album’s standout moments. Duck People cleverly superimposes a mock video-game soundtrack against a laconic soul-jazz groove, and as Lullabye shifts through the gears Hey’s post-bop piano really rips it up. Less convincing are Tiny Soul, which flirts with catchy electro-pop before descending into banality, EAV, which mines a mildly irritating 80s soft-rock vein, and the corny Times Like These, which has all the subtlety of crude slapstick.

Forq would probably be the first to admit that they’re a band that are best experienced live, and while this is an amiable enough set, it doesn’t ultimately stand up to close and repeated listening.

Simon Adams - 05 December 2019
MPH came together in 2018 at the suggestion of Alex Maguire, who had previously worked separately with both Martin Pyne and Mark Hewins. Given their varied backgrounds in jazz,...