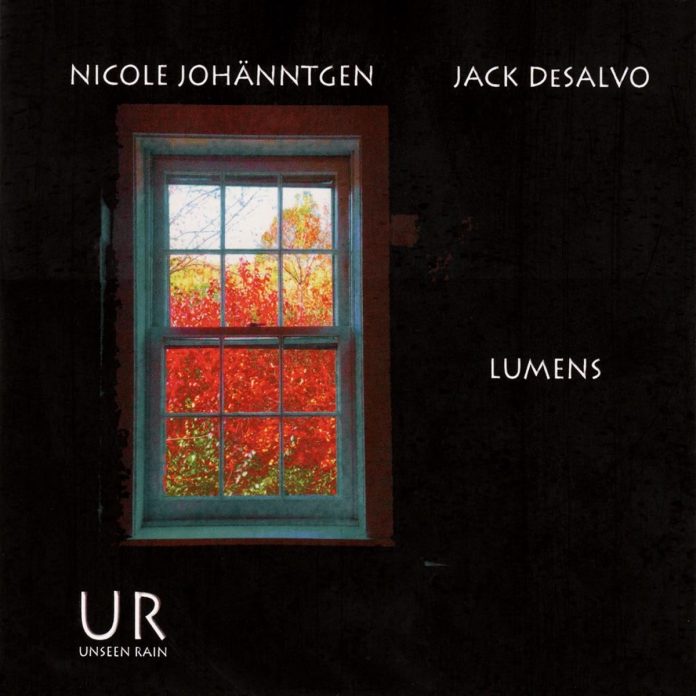 In 2016 Johänntgen left her native Zurich for a six-month sojourn in New York. Paradoxically, to date the fruits of this Big Apple experience have been the two (excellent) Henry discs she recorded with New Orleans-based musicians, the second of which I reviewed in February 2109. (A third Henry is in the pipe-line.)

Recorded in Wayne, New Jersey in mid-summer 2016, Lumens is a chamber-music set of liquid, lyrical and questing duets with guitar improviser DeSalvo. It offers due testimony to Johänntgen’s New York experiences: it followed her meeting and playing with DeSalvo (whose CV includes work with Ronald Shannon Jackson) in Matt Lovelle’s 12 Houses orchestra in New York.

Those who know the soprano and classical guitar duets Krusning and Yr which Jan Garbarek and Ralph Towner cut on Garbarek’s 1976 ECM recording Dis may sense no small congruence here in beautifully measured and “breathing” pieces such as the title track, Sent and Instance.

But Johänntgen’s use of alto rather than soprano brings a stronger (albeit sublimated) sense of jazz to the proceedings, exemplified by the development of her ascensional solo in Sent and the brief bluesy flourishes that are the coda to the otherwise gently turned Hand In Hand.

And the two longer, shape-shifting tracks – the 11-minute Has Never Said A Word and the 13-minute Reappearing Sun – explore welcome touches of edgy rhythm and tonal experiment in music that often sets itself at the further edge of things, so to speak, even as the overall feeling remains one of poetic depth and lyrical affirmation.