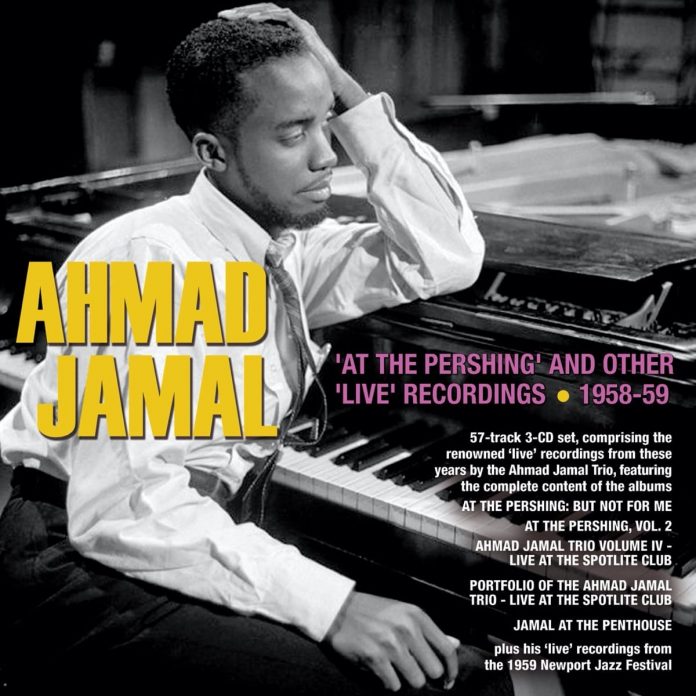 Ahmad Jamal is now an active and still creative 90 year-old pianist. Most of these early and seminal recordings have been frequently reissued, and almost universally commended. In the JJ July 2019 I gave the 1958 Complete Live At The Pershing Lounge sessions five stars, and bestowed the same rating on the Ahmad Jamal Trio with Israel Crosby & Vernel Fournier: The Classic 1958-1962 Recordings (JJ November 2015).

This CD has all of those titles together with the trio’s lesser-known 1959 Penthouse and Newport Jazz Festival appearances. There is really nothing “new” to say about the near-legendary Pershing/Spotlite dates – although there are only extracts from the Spotlite engagement on this compilation – except to say that if you haven’t already heard them remedy that omission asap.

The Nola’s Penthouse Studio sessions are unusual in that they featured a 15-strong string section, arranged and conducted by Jamal’s friend, the violinist Joe Kennedy. Sprightly and delicate versions of Comme Ci Comme Ca and Never Never Land have Jamal, Crosby and Fournier engaging with but not overwhelmed by the strings.

A jaunty performance of Tangerine has the trio calling the musical shots, with a particularly fleet Jamal solo. A majestic version of Ahmad’s Blues is followed by a gently swinging Seleritus (a Jamal composition) with the strings mainly in the background, until an abrupt and explosive conclusion. A very brief I Like to Recognize The Tune bounces merrily along, at a turbocharged tempo ignited by Crosby and Fournier.

The Penthouse set is a pleasant enough (if semi-pop) date, and not nearly as rewarding as the set performed at Newport on 2 July (Jamal’s birthday) in 1959. The opening It’s You Or No One is enhanced by Fournier’s expert brush work, while a nine-minute version of Poinciana (famously performed at The Pershing) received instant audience recognition and applause. After gently stating the attractive melody, Jamal ups the volume with dramatic block chords, with bass and drums in highly rhythmic support.

No Greater Love, with its echoes of Erroll Garner and Earl Hines, swings gently from start to finish, followed by an uptempo rendition of Rodgers and Hammerstein’s Surrey With The Fringe On Top. Jamal’s mastery of shading and dynamics draw appreciative responses from his listeners. George Gershwin’s But Not For Me (also on the Pershing set) but here running to seven minutes, features Fournier’s tom toms and a blues-tinged solo from Jamal.

Taken singly or together, these remastered performances show conclusively that as a young man, Ahmad Jamal was already an accomplished and innovative pianist and composer. The African-American critic Stanley Crouch has written that he was a “true innovator of the jazz tradition … Through the use of space and changes of rhythm and tempo, Jamal invented a group sound that had all the surprise and dynamic variation of an imaginatively ordered big band”.

Fortunately for all of us, he also managed to mature with age – and is still around to prove it.

Kris Kringle had a bad trip this year and didn’t get to my house until 2 January, so late that I’d already reblocked the...

John Szwed’s magisterial 1997 biography of Sun Ra – Space Is The Place – opened the floodgates of books and articles about Ra and...

The first solid news of Miles' return to the scene was brought by singer Betty Carter earlier this year. But she bemoaned the fact...

"Taken singly or together, these remastered performances show conclusively that as a young man, Ahmad Jamal was already an accomplished and innovative pianist and composer"John WhiteAhmad Jamal ‘At The Pershing’ And Other ‘Live’ Recordings 1958-59
Advertisement