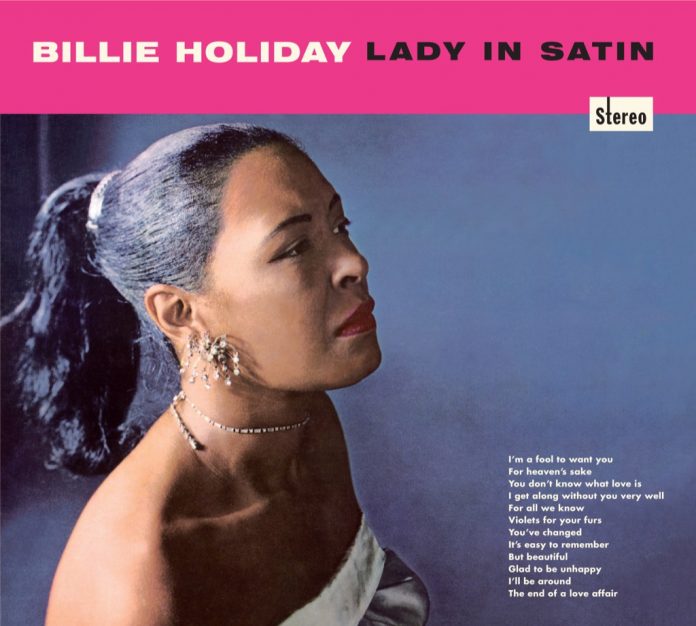 Largely panned on its initial release, Lady In Satin would turn out to be Billie Holiday’s penultimate studio album, which perhaps accounts for some measure of its “classic” status today. The set is a collaboration between Holiday and the Ray Ellis Orchestra, and thus is entirely made up of string-laden ballads, with little in the way of swing. It’s a rather laboured, somnolent affair, and it’s thus somewhat understandable that it was blasted as “insipid” and a “disaster” by critic Glenn Coulter at the time of its release.

This reissue of the 1958 album also includes 11 bonus tracks from a recording session Holiday did with Ray Ellis and His Orchestra the following year, only months before her death in July 1959. Unexpectedly, these bonus recordings sometimes carry more heft and interest than the main attraction, even if their sound is slightly more compressed than that on the original album tracks.

As the liner notes to this edition are keen to point out, Holiday’s voice was past its best when this was recorded – but that doesn’t mean she’d lost an ounce of her emotional impact and range. Hear the bitter accusation in the opening lines of You’ve Changed; the pained longing in I’m A Fool To Want You – her voice may be slightly cracked but it is nevertheless always rich and arresting, with every word assigned specific meaning.

Those who prefer hearing Holiday in a small-group setting with the spotlight fully on her expressive vocal may find little to enjoy on this album beyond its historical importance, heavy as it is with Ellis’s elaborate orchestral arrangements. Others will find the full, sumptuous orchestra only lifts and enhances the poignancy of what would be one of Lady Day’s last outings.

Discography
I’m A Fool To Want You; For Heaven’s Sake; You Don’t Know What Love Is; I Get Along Without You Very Well; For All We Know; Violets For Your Furs; You’ve Changed; It’s Easy To Remember; But Beautiful; Glad To Be Unhappy; I’ll Be Around; The End Of A Love Affair; All Of You; Sometimes I’m Happy; You Took Advantage Of Me; When It’s Sleepy Time Down South; There’ll Be Some Changes Made; ’Deed I Do; Don’t Worry ’Bout Me; All The Way; It’s Not For Me To Say; I’ll Never Smile Again; Baby Won’t You Please Come Home (78.38)
Holiday (v) with Ray Ellis and His Orchestra. 18 to 20 February 1958 and 3, 4 and 11 March 1959. New York.
American Jazz Classics 90251

Nigel Jarrett - 21 June 2021
Scandinavian jazz has never been much out of contention, nor has it been short on innovators. If these observations needed illustration, this lively union of the TJO and The...