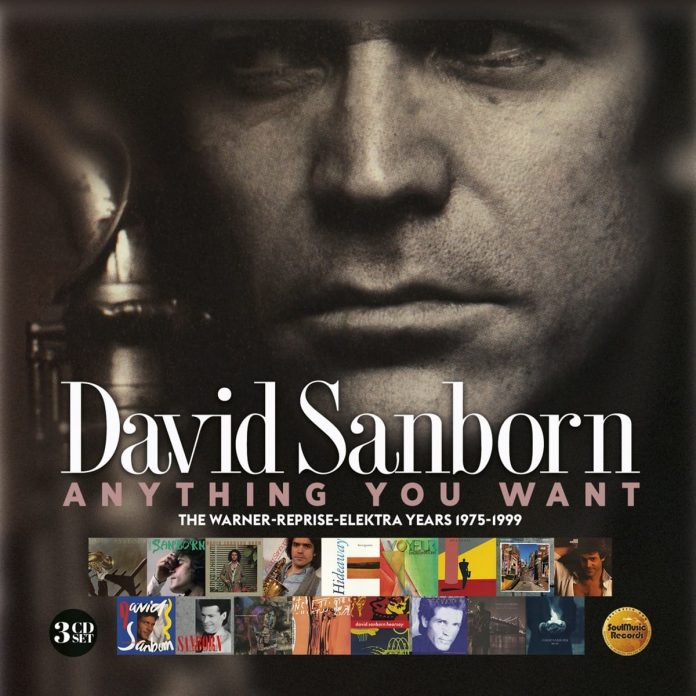 This three-CD set was issued to mark David Sanborn’s 75th birthday in July this year and also the 45th anniversary of his first LP. While he’s best known for his hit albums in the late 1970s and 80s this set explores all 17 he recorded as a solo artist between Taking Off in 1975 to Inside in 1999 and includes radio edits and live cuts.

The bulk of the compilation comes from Sanborn’s Warner and Elektra years with only two songs from the sole Reprise album featured in the set. The collection of 45 songs isn’t in chronological order but instead each CD focuses on different aspects of his output.

The first CD, New York Dave & The Cali-Crossover Express, covers his early 1970s stage of New York fusion and its crossover with the Los Angeles music scene. It includes the set’s title track – Anything You Want, Sanborn’s first solo compositions and the only song he ever sang lead on – Stranger’s Arms.

CD2, Sanborn: Soul Man, highlights his expansive soul and funk output with such numbers as All I Need Is You, his remix of Marvin Gaye’s Got To Give it Up and Neither One of Us with Luther Vandross as background singer.

The third CD, Evening Ember Evocations is a mix of blues (perhaps surprisingly to some, Sanborn was a member of Paul Butterfield’s Blues Band for four years from 1967 to 1971), interpretations of songs by Aretha Franklin, Lou Reed and Wayne Shorter amongst others, lush orchestral pieces and rearrangements of jazz standards.

After listening to the tracks in this set you’d be forgiven for thinking that over the years there’s been a good deal of similarity in Sanborn’s delivery. Every note seems infused with the same explosive energy. He invariably injects urgent, piercing saxophone runs into most of his numbers and in this regard I’ve always thought he might have employed a performance technique used by Enoch Powell. You may recall that the latter deliberately made speeches on a full bladder in order to increase the tension in his voice. The similar effect evoked by Sanborn can certainly sound dramatic when you first hear it but after a while and with three whole CDs of this, the constant urgency can become a tad wearing.

The set comes with an interesting 20 page booklet containing comments about the songs and observations from Sanborn and his peers including Randy Brecker, Steve Khan and primary collaborator, Marcus Miller.

Michael Tucker - 25 April 2021
Power, observed Paul Bley, can come from a quiet place. I don't know if any such place could ever be called patient, but if it could, Danish guitarist Jakob...