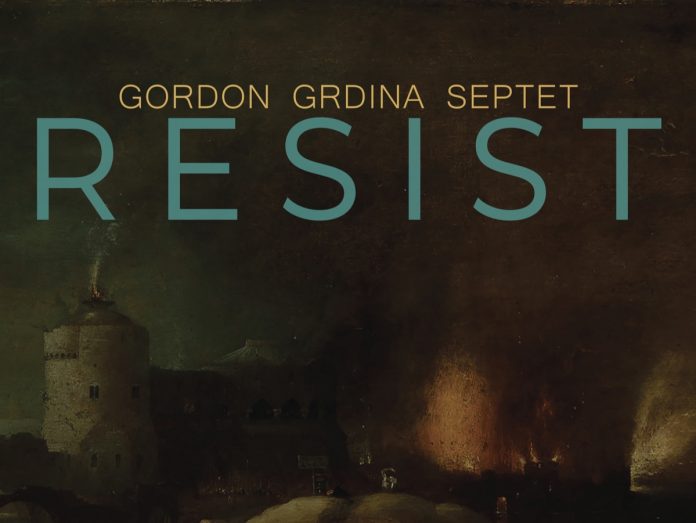 By my reckoning this is Vancouver-based guitarist and oud player Gordon Grdina’s third release of the year, coming hot on the heels of albums by his Nomad Trio and The Marrow. He’s a singular artist whose music proudly defies ready categorisation. His auspicious 2006 debut Think Like The Waves was an expansive post-bop set with Gary Peacock and Paul Motian. Since then the JUNO Award-winner has performed everything from classical Arabic music to indie-rock and free improvisation, but this ambitious new work surely occupies a unique place in his discography.

A considered response to the menacing challenges of “post truth” populism, Resist is a work that ultimately seeks to reconcile conflicting extremes. Written for the 2016 Vancouver International Jazz Festival, it has Grdina uniting his East Van Strings (heard on 2009’s The Breathing Of Statues) and regular trio sidekicks Banian and Loewen. Label-boss Jon Irabagon adds piquancy to the music’s more turbulent passages, and what may at first appear a rather lop-sided ensemble actually provides Grdina with a rich instrumental palette.

At almost 25 minutes in length the title-track balances through composition and free improvisation, animating Grdina’s central themes to dramatic effect. Few things better represent classical ideas of beauty than a solo cello, and it can surely be no coincidence that Lee provides the opening statement. Her lyrical flow is increasingly threatened by dissonant cross-currents, and Grdina’s abrupt entry on electric guitar signals a dramatic change in mood. Irabagon uses a rather hectoring vamp as a launchpad for a robust solo before Grdina’s oud restores a short-lived sense of harmony. The furious middle passage sees Irabagon unleash a volley of split notes, but as the long compositional arc reaches its destination the horizons are levelled and a faint sense of hope is introduced.

Of the shorter pieces, Seeds is a brief but sumptuous oud solo, Varscona places Irabagon in the midst of a gritty post-Trane burnout, The Middle is a sketch for the title-track’s abstract centre-section, while Ever Onward throws the focus back onto Grdina’s melancholic oud.

A passionate appeal to reason, Resist connects with the enduring and universal ideals of truth and beauty that have sustained the human spirit across the centuries.

This is Bryant’s ninth own-name release, the album title acknowledging both her instrument and her age at the time of this recording. The result...

Dave Gelly discovers the silver lining of epidemical house-arrest - rummaging among old records. For Art Themen, it's front doorstep serenades for the neighbours

During a relatively short career Joe Maini became one of the finest alto soloists and lead players of his generation, hugely admired by his...

Mark Murphy is one of the greatest jazz singers of all time; it is not too much to say that he has everything. The...