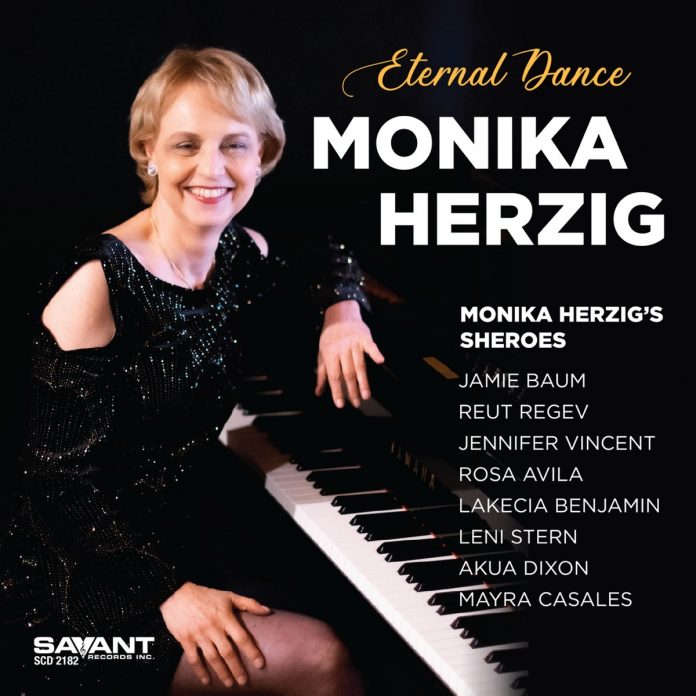 Born in Germany, which is where she first studied, Herzig has been primarily resident in the US since the late 1980s. There, she studied at Indiana University where she later became a faculty member. She has performed and recorded with various groups, including BeebleBrox and her own Acoustic Project. Recently, she has been leader of Sheroes, the quintet that is heard here.

Usually drawing on contemporary jazz and pop among source materials, Sheroes here perform mostly originals, with all the music subtly blending styles and forms. The originals are Herzig’s Eternal Dance, Fly High, Fall In Reading, Memories Of Petra and Dear Geri, which is dedicated to fellow jazz pianist Geri Allen, Stern’s Rabbit, Baum’s Seas Of Change and Regev’s Up In The Sky (on which the trombonist also sings).

For the non-originals, Sometimes I Feel Like A Motherless Child and the Queen and David Bowie songs, the use of different time signatures and skilful arranging brings a pleasing sense of novelty to otherwise familiar music.

Always interesting and expertly performed, this album should appeal to all who enjoy contemporary jazz.

An accomplished hard bop trumpeter and a prolific composer, Brian Lynch is not yet a jazz household name in the UK. Born in Urbana,...

Some dismiss it as a time of mullets and macho chops, but 1990 gave birth to the much-admired debut album by the Missouri-born drum virtuoso who had come to prominence with Chick Corea

Johnny Hodges died in 1970, nearly half a century ago and it’s rather amazing that until now there has been no book devoted entirely...

Perhaps the most interesting aspect of this cheerful set is the absence of Dave Holland. Although he toured with the trio this summer, all...