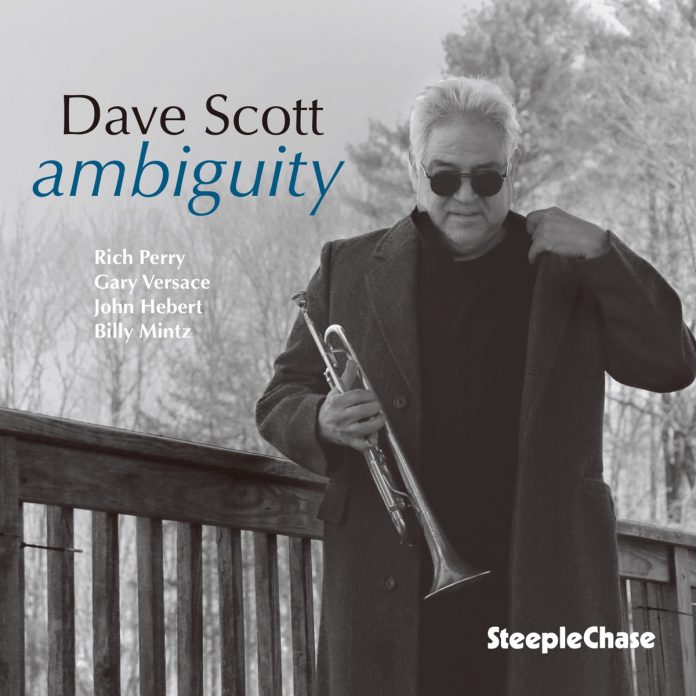 Scott’s five-piece combo consists of musicians that have known each other and played together for 20 years or, in some cases more. Scott and bassist Herbert have been playing together for 25 years.

The leader wanted a fresh, contemporary sound in which the soloists could improvise freely on his structures and, taking an idea from Miles Davis, asked them not to play what they knew but what they did not know. It worked well with six compositions that provide good frameworks for improvising musicians to work with.

Ambiguity, the first piece, begins with collective improvisation over an ostinato in 5/4 time. Scott has an open, brassy sound and he constructs darting lines that he fits around the theme. Perry has a floating sound on tenor, rather like Wayne shorter vintage 1964 but with a free-jazz style of improvising once he gets into a tune. Billy Mintz plays a repetitive, static rhythm throughout that must have been boring for him but fits the music ideally.

This piece segues straight into the next, Diligence, where the tempo is increased, and the time is 7/4. Although these compositions are in free form the level of construction is impressive with the soloists creating fascinating improvised solos. They have tightly integrated ensembles on most tracks and the solos jump out from these naturally enough.

Obscurity is a ballad type, beginning with a long bass solo and the rest of the solos emerging from what the composer calls “a series of composed cells”. Song For Janie is the most lyrical offering, a slow ballad composed for Scott’s wife and played through with a full round of warmly fashioned individual solos. Redactions is a straightahead swinger with complex solo lines and Special Sauce is a bouncy work with trumpet and tenor sax players improvising together. This one in 11/8.

This is a fresh approach to old forms in free jazz and suitable for any enthusiast who usually enjoy more traditional formats.

Of all the many inane comments about jazz – “the music that puts the sin in syncopation” and the like – the summation offered...

Tommy Dorsey liked to have all the “improvised” solos in his numbers concur note-for-note with the originals on his records. One night in the...

Funk, funky, and funkiness are terms employed so glibly when enumerating and evaluating the elements that have enriched jazz that it's worth calling on...

Books on jazz tend to fall roughly into one of two categories. The majority are biographical, historical accounts of musicians and subgenres that elucidate...

Michael Garrick, gifted young composer and pianist with the Carr/Rendell Quintet, is well showcased on this sober, musicianly LP. With the aid of his...