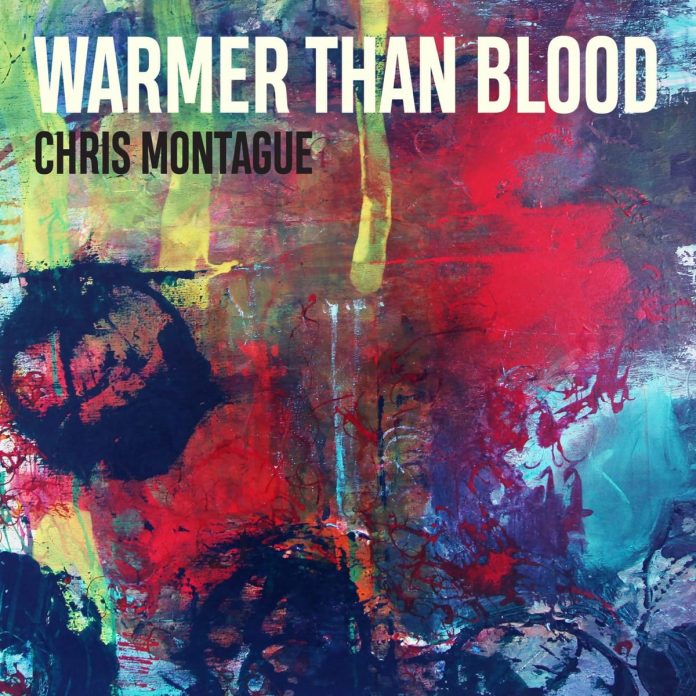 Warmer Than Blood, the first album from guitarist and composer Chris Montague under his own name, brings him together with his neighbours and musical collaborators, the husband and wife team of pianist Kit Downes and bass guitarist Ruth Goller, on a selection of Montague’s original compositions and improvisations.

Montague, Downes and Goller are neighbours in Chesham, Buckinghamshire (a relationship referenced in the title of C Squad). This collaboration goes beyond mere neighbourly expediency, however. Downes and Montague have a long history of musical partnership in Troyka and its big-band offshoot, Troykestra; Goller has been part of some of the most exciting young bands of recent years including Acoustic Ladyland and Melt Yourself Down. Her playing on Warmer Than Blood is notable for its subtlety, an assured performance that provides a crucial foundation for guitar and piano.

Irish Handcuffs (Introduction) is an improvised solo guitar piece, setting the scene for Irish Handcuffs proper – apparently the title comes from Montague and Downes’s idea of Irish hospitality involving whiskey in one hand and Guinness in the other. Warmer Than Blood is a gentle, melodic number, building in intensity during its final couple of minutes before resolving to Montague’s lone guitar’s simple rhythm.The track that follows, FTM, is named after Montague’s young son – a surprise, considering that this is the most unsettling and disturbing tune on the album. Moira, inspired by Montague’s grandmother, is another solo improvisation and, like the title track, it’s characterised by spacious, delicate and thoughtful playing. It segues effortlessly into Rendered, Downes joining Montague with equal delicacy and flair.

Elliot Marlow-Stevens - 18 August 2019
Continuing their strategy of releasing classic jazz albums with altered track listings and updated liner notes, MatchBall Records has released At The Village Vanguard, which is a combination of...