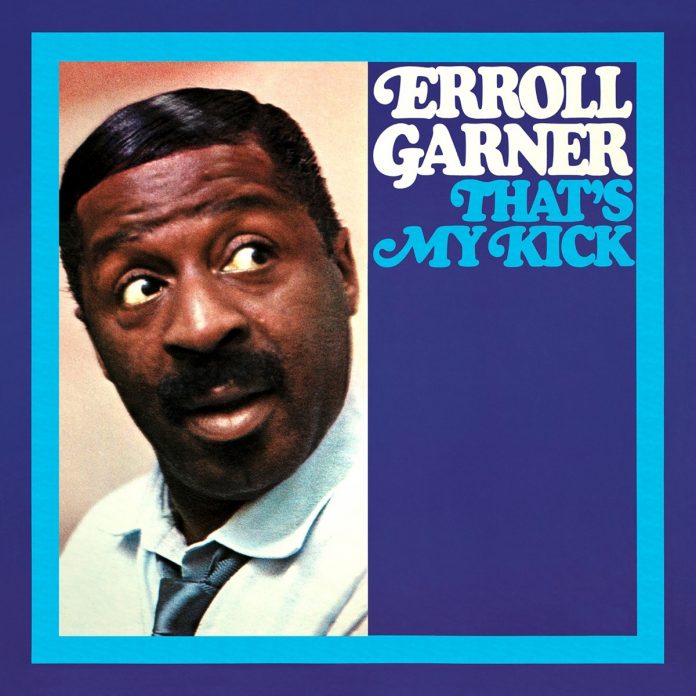 Writing in 1977 – the day after Erroll Garner’s death – Whitney Balliett characterised him as ”an anachronism who belonged with the great jazz primitives of the twenties and thirties [who] developed a style of such originality and presence that it became nearly autonomous. One bar was enough to identify him”.

That perceptive comment can be applied to any of Garner’s “live” and studio recordings, with That’s My Kick as a prime example. The title track, a gently rocking Garner composition, features his trademark polyrhythmic introductions, and what Billy Eckstine called “a rhythmic grunt”, with propelling accompaniment by the distinguished rhythm section. Listen especially to Milt Hinton, Herbie Lovelle and congo drummer Jose Mangual.

An all too brief Shadow Of Your Smile gets a rhapsodic workout. Like It Is, another Garner creation, canters along at a brisk pace. The other originals – Afinidad, Passing Through, Gaslight, Nervous Waltz – demonstrate his (under-sung) talents – apart from Misty – as a composer.

Autumn Leaves gets a faster and more stimulating treatment than it received on his Concert By The Sea album. A rocking interpretation of More is followed by a gentle Gaslight with echoes of A Foggy Day (In London Town), and would benefit from the addition of lyrics. She Walked On – is a previously unreleased title – and almost certainly a Garner composition – which I can only characterise as one of jolly mock solemnity.

In fact, the entire album is infused with Erroll’s infectious spirit of joyous music making, too often dismissed by some critics as “pop jazz”. Fittingly, the epitaph on his tombstone at the Homewood Cemetery in Pittsburgh reads “He gave of himself unselfishly.”

A shortcoming of all these remastered and expanded editions of Garner recordings from the 1960s, originally produced by his manager and eminence grise, Martha Glaser, is that they lack liner notes. Those who feel the need to acquire them should go to errollgarner.com/ORS.

Brian Morton - 11 August 2020
Much – maybe most – of the best music coming out of Britain at the moment has Martin Archer’s thumbprint on it, either as player...

Jazz Journal - 26 April 2021
This is one of a series of taped interviews with musicians, who are asked to give a snap opinion on a set of records played to them. Although no...