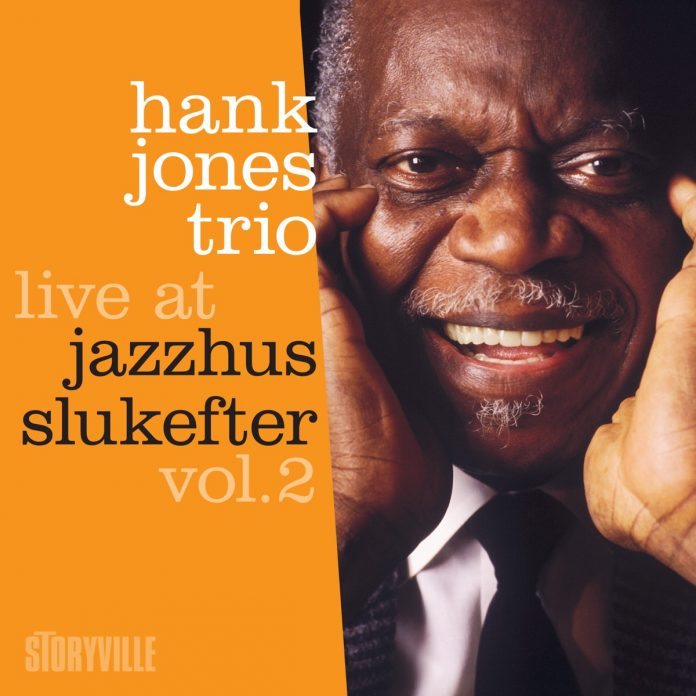 As a result of his association with Charlie Parker and assorted original bebop musicians, Hank Jones came to be known as a bop-inflected pianist. That is true but only part of the story. He quickly latched on to Parker and Gillespie’s brand new and complex symbiosis of harmony, melody and rhythm. Bud Powell exerted a strong influence.

However, the Vicksburg, Mississippi-born and Pontiac, Michigan-raised oldest brother of the equally legendary Thad and Elvin Jones journeyed through the swing bands of Hot Lips Page and Andy Kirk. Moreover Jones subsequently studied classical theory with the renowned Jascha Zade in New York, one of countless instances in jazz biography that debunks the preposterous myth of the classic jazz man as a “noble savage”.

By his own account, Hank Jones “the pianist” lived in the era of Oscar Peterson and he shared with his virtuosic Canadian colleague the thought that, had the times been less discriminating and oppressive, a career as concert pianist was, if not a burning ambition, a realistic option. Jones commonly warmed up with a bit of Chopin. His subtle style, however, has nothing of Dave Brubeck’s overt classicism.

At any rate, instead of a classical career, Jones served as a performer for the CBS broadcasting system from 1959 to ’74. His comeback to jazz was notable and it’s a difficult task to find a better example of his skills as a live performer than Live At Slufekter, Vol. 2. By then, in 1983, the ageing globetrotter had made a stopover in Copenhagen, Denmark, accompanied by bassist Mads Vinding and drummer Shelly Manne.

Jones ploughs a fertile land of ideas and at times is agog with inspiration. Remarkable elegance of line pervades his performances, which include a supple take of Joe Henderson’s Recorda Me and a flagwaving version of Charlie Parker’s Moose The Mooche, dashed off like darts at the end of a match already won, and suddenly finishing with a nine-darter.

Eddie Gomez’s blues tune The Bruise is enlivened by a fragment of jubilant simultaneous double timing by Jones, Vinding ánd Manne. Jones’s delicate touch lifts the already beautiful Johnny Mandel’s Emily to a higher level. His solo reading of Thelonious Monk’s Ruby My Dear is a waterfall with gentle drops dripping down the rocky slope.

There’s no strain in the playing of Jones, which arguably is less common than generally assumed: complexity embedded in a luscious flow. Vinding and Manne add remarkable solo spots, stunning in the case of Vinding. But more importantly, their flexibility and Manne’s consequent switch from meaty brush playing to poised handling of the sticks enables Jones to rejoice in his flow and architecture of the arc. The arc is the essential ingredient in the art of meaningful storytelling and comes naturally to a pianist with such a staggering standard of imagination as Jones.

Three classic albums, three EPs, 16 singles and a couple of bonus tracks from the movie Beat Girl all packaged in a double-CD release,...

This is a characterful and consistently entertaining, even compulsive, read. Translator Heidi Kirk has done a fine job in bringing over into English the...

"Jones ploughs a fertile land of ideas and at times is agog with inspiration. Remarkable elegance of line pervades his performances, which include a supple take of Joe Henderson’s Recorda Me and a flagwaving version of Charlie Parker’s Moose The Mooche"François van de LindeHank Jones Trio: Live At Jazzhus Slukefter, Vol. 2
Advertisement