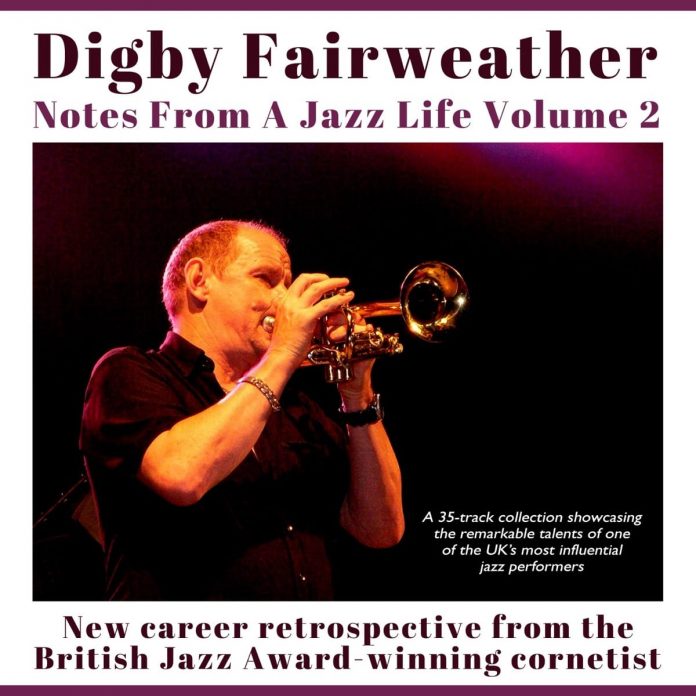 For close on 50 years, Digby has been enthusiastically active in British jazz as an award-winning cornetist/bandleader, writer and broadcaster. His wide-ranging musical involvement has been matched by laudable supportive input for jazz culture over the years as a touring educationist, patron of jazz festivals, founding member of the National Jazz Archive, Loughton and the prime mover and director of the UK Jazz Centre in Southend.

He has played and recorded with most of the top names in midstream British jazz, so very much deserves, at Acrobat’s invitation, this second volume showcasing his favourite recordings. In the full and enjoyable insert notes he salutes with generous appreciation the talents of his musical associates.

Whilst the sophisticated lyricism of Braff, Butterfield and Hackett has inspired Digby’s basic style, he has always welcomed a challenging variety of settings as is evident throughout the 35 tracks of this two-CD set (1979-2003). Things kick off brightly and stylishly with a fine mainstream arrangement from First Class Sounds (a group promoted appropriately enough by the Post Office itself in 1998!).

In 1979 Digby’s Velvet quartet, inspired no doubt by the celebrated Braff/Barnes recordings, gave him the opportunity to interact in close rapport with guitar masters Ike Isaacs and the feisty Denny Wright (with whom sizzling high-speed exchanges take place in Avalon). With his Friends, Digby produces some sensitive, expressive blues trumpet, and Chris Ellis sings here (and later) in relaxed, husky vintage style, very like George Melly.

Six tracks present Digby in the unusual instrumental company (obviously enjoyed) of an accordionist, Tony Compton, who succeeds in swinging with capricious wit and spirit. His instrument updated with electronic modifications, he produces a full-bodied sound effectively like a light-toned electric organ. In an eclectic programme, Wave, Dark Eyes and an upbeat Sonny Boy are particularly enjoyable.

On CD2, Digby’s Half Dozen perform an appealing arrangement of I’ll See You In My Dreams, featuring top bassist Len Skeat, and a cheerfully gruff and gravelly George Melly struggles gamely with breath and pitch, but not with expressive spirit. After enjoyable revisits to Ellis, Compton and Barker, further stand-out passages are heard in the brisk and lively Nagasaki, in the interesting My Sweet with a Digby vocal, and in the closing jam on Honeysuckle Rose, Digby enjoying an unaccompanied duet chorus with Humphrey Lyttelton.

Besides his outstanding, spectacular trumpet-cornet, there’s much to enjoy in this highly recommended compilation from his talented fellow musicians, likewise well deserving of this tribute. Digby can look back on this recorded legacy with justifiable pride and satisfaction. “First Class Sounds” makes an apt summary.

Gordon Jack - 30 May 2019
This is a surprising and very welcome reprise of the 1974 collaboration between Astor Piazzolla (one of the greatest composer-performers of the late 20th century) and jazz giant Gerry...