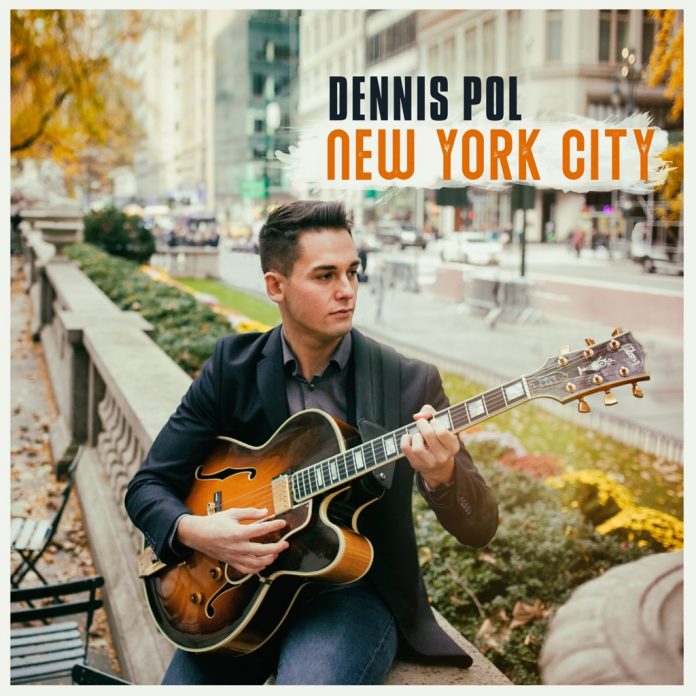 Guitarist Dennis Pol has released his debut album New York City, which features an eclectic range of musicians from all corners of the world – Alina Engibaryan from Russia, Omer Ashano from Israel, Josh Kaye from England and Joe Bussey from the USA.

The album features nine tracks, two of which are original compositions by Dennis, Motel One and Mr. Vasilis. The album as a whole incorporates the traditions of gypsy jazz and swing but laced with a modern touch too. This combination of established and modern approaches gives the album an individual style.

The album begins with the title track, a composition by one of Dennis’s major influences, Django Reinhardt. It begins with Dennis on his own playing the simple head acoustically; the remaining musicians then join him as he enters his stylistic solo. Motel One, featuring Dennis on electric guitar this time, has a complex head doubled with violin; however, when he breaks into his solo, the nature of the track sways to a more bluesy feel. Mr. Vasilis, a slow ballad, contrasts nicely with the previous two tracks and reminds me somewhat of God Bless The Child. This shows Dennis’s true ability to improvise as well as his ability to compose, a piece fit for any jazz enthusiast. Limehouse Blues is a feature for the violin with an upbeat tempo and includes tasteful trading in fours between the musicians.

Undecided and If I Had You both feature Alina on vocals. She proves to be a unique addition to the quartet, her style bringing a fresh and contemporary twist to the album. Somethin’ Stupid has been covered many a time but this reading still finds a fresh route through the classic.

This album is a pleasant blend of idiomatic styles: the majority of tracks feature traditional gypsy-jazz guitar chugging, but solos are often influenced by the blues. It’s a perfect balance of jazz classics and original compositions (Motel One is a personal favourite of mine) and surely marks the beginning of a very promising journey in jazz for Dennis Pol.

Hugh Rainey - 13 December 2020
Since their first and well-received album in 2016, the UK-based Dime Notes have been busy globetrotting as expert exponents of classic New Orleans style hot jazz. This second release...