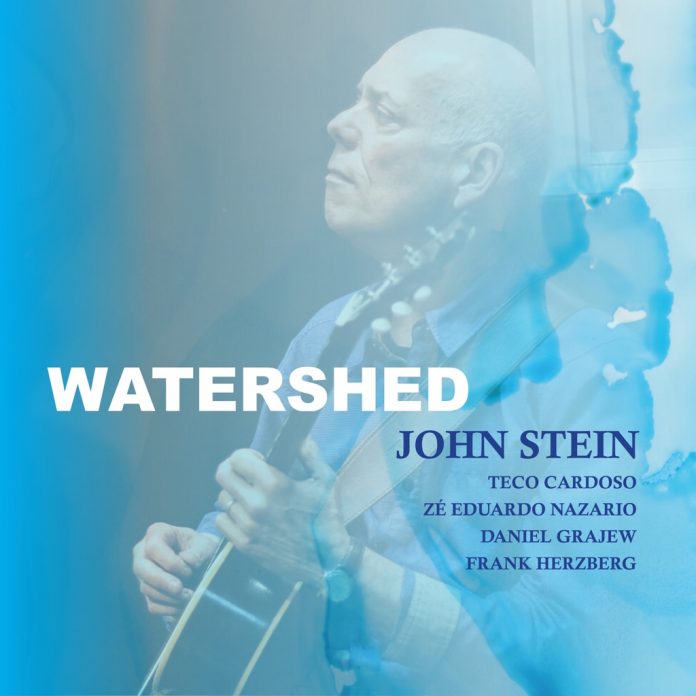 John Stein has accomplished a great deal as a guitarist, with a lengthy list of album releases, a career teaching at the Berklee College of Music, and sessions the likes of Lou Donaldson and Idris Muhammad. Watershed presents a series of tracks, mostly originals, that encompass a mixture of more traditional-Latin style pieces with bop and smooth jazz.

Beginning with an original, Rio Escurso, Stein carries the gentle melody in unison with flutist Teco Cardoso before the pair take solos, backed by soft keyboard, brushed drums and upright bass. The quintet maintains this style throughout, relying on timbral dynamics to bring variation, as the band ebb and flow in intensity.

As Stein and his ensemble move through a series of original jazz pieces, the listing is interspersed with a selection of covers, the first of these being A Taste Of Honey, composed in the early 1960s by Bobby Scott and Ric Marlow for the play that was to become the famous “kitchen-sink” drama, and covered by the likes of The Beatles and Herb Alpert. The band takes a steady, reserved approach to the piece, with Stein leading with melody and chords, over quiet shimmering electric keyboard and sparse drums.

Other covers on the album include Jim Hall’s Waltz New and Pat Martino’s Cisco. Waltz New was originally just for guitar and upright bass, but Stein adds drums to bring another rhythmic element to the piece. Martino’s Cisco is played with the same swing and groove as the original, but with a down tempo, spacious approach, leaving room for Stein and Daniel Grajew to improvise.

Overall, Stein’s latest album provides a range of tracks, each with the consistency of a professional jazz quintet, but with enough variety throughout to keep it interesting and engaging.

Bruce Lindsay - 06 July 2020
Harpist Riza (née Hequibal) and trumpeter Marcus have been married since 2010 and have been playing duets together for at least as long, if not longer. Gentle Rain is...