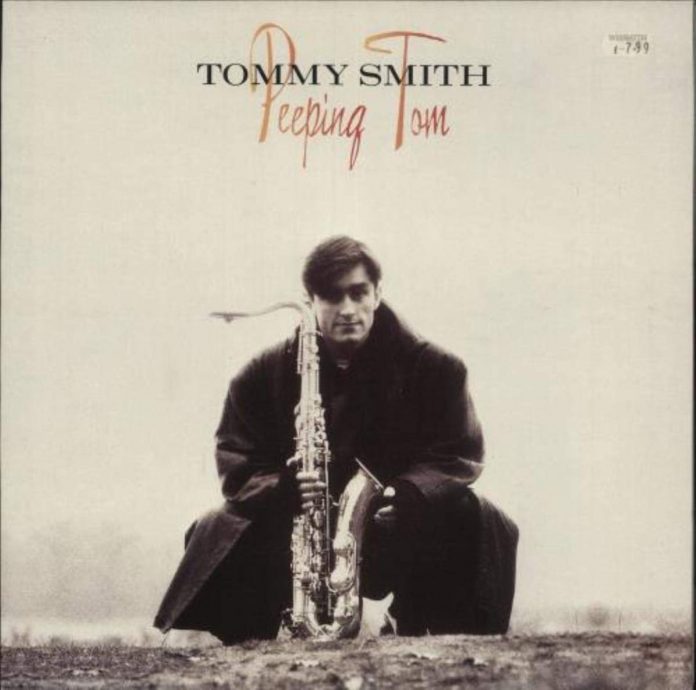 On his somnolently cautious Blue Note debut last year, Edinburgh’s local boy made good seemed to have gone off the boil, overawed perhaps by the gravity of the occasion. Here he returns to more upbeat territory, even if Peeping Tom only hints at the raw brio and open-ended group interaction which characterised the 1984 Forward Motion set The Berklee Tapes (Hep 2026, reviewed JJ, Dec 1985).

The cooling influence of Jan Garbarek remains strong, if somewhat more keenly focused, and the sorrowful Nordic imprint is found on a good two-thirds of this material. The session was re­corded in Oslo by ECM engineer Jan Erik Kongshaug and predict­ably the unhappy piano arpeg­gios and brooding tenor of Fol­low Your Heart, Merry Go Round and Biting The Apple do nothing to lighten the heart.

But there are bright, even com­pelling moments, many of them on the opening New Road, which begins with a refreshingly presented Celtic-flavoured theme – executed by Smith using wind synth controller and an arsenal of synthesisers – before breaking into urgent four-to-the-bar swing. Like Slip Of The Tongue (note the echoes of Hancock’s Eye Of The Hurricane) and Peeping Tom, it prompts Smith to draw from the Coltrane and Michael Brecker phrasebook, although without the sense of discovery evident on that ’84 session.

The Englishmen Rebello and Stacey work well throughout, Re­bello anonymously competent in the Hancock/Corea vein and Sta­cey adjusting his approach to suit the idiom – like Scofield in the opening minor/major third lick of his New Road solo, blending Martino and Metheny on Slip Of The Tongue and playing Rypdal-with-chops on Apple.

When they get the chance, Gewelt and Froman drive the ses­sion in much the way they drove The Berklee Tapes. I wonder if they have ever reminded their leader of the fun they had those halcyon days of youth?