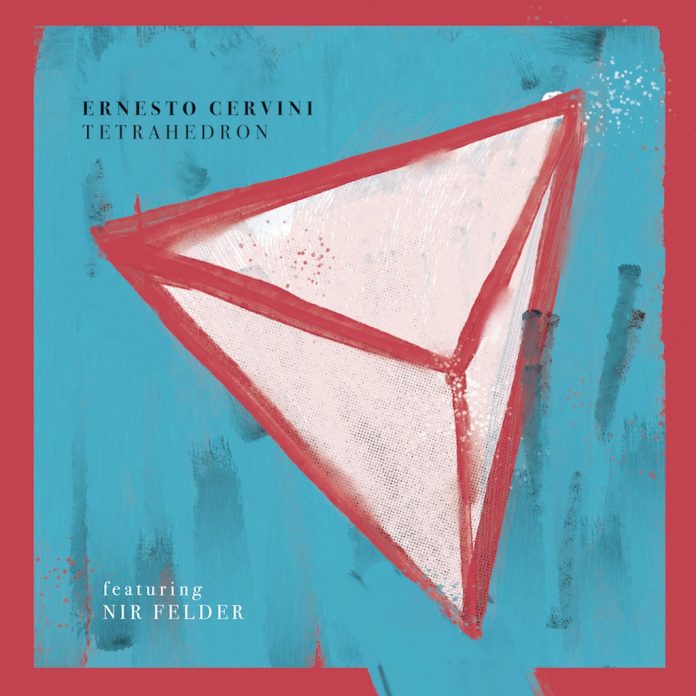 Canadian drummer/composer Ernestino Cervini is a busy man. He leads a a sextet and a quartet and plays in three different trios plus a Radiohead cover band. On top of this he’s recently formed a chordless trio named Tetrahedron, which is also the title of their first album. It’s an appropriate moniker in that a tetrahedron is a triangle with four sides and for this recording the trio becomes a quartet with the inclusion of a guest – New York based guitarist Nir Felder.

The album comprises four compositions from Cervini and one from electric bassist Rich Brown, a standard and two covers – one by Vince Mendoza and the other by altoist Bunky Green. The style of music is diverse with a tendency towards jazz fusion and funk – the latter being new territory for Cervini.

Softly, As In A Morning Sunrise begins with rich flamenco bass from Brown before moving into a tension-building sax and guitar jam with tenacious drums. We don’t hear the actual melody until the very end. Forward Motion jumps straight in with complex guitar and drums. Then comes Brown’s six-string walking bass, muscular sax soloing from Deniz and Cervini going all out on the kit. Mendoza’s more peaceful Angelicus is a lovely ballad with an exquisite intro from Felder, sensitive sax soloing, classical overtones and neat brushwork from Cervini. To my mind, it’s the album’s top track.

Boo Radley is named after the cloistered character in Harper Lee’s To Kill A Mockingbird. At times guitar and bass rhythms recall strains of Coltrane’s Giant Steps. Stro is a minor blues named after a major Toronto baseball pitcher. Summit Song is barnstorming with a bebop feel, fervent guitar and a swinging sax solo whilst Wandering is sweetly melodic with intricate sax and guitar interplay. To close the album, The Sneaky Two, named after New York’s slow number 2 train, delivers powerful bass and drums with contrasting passages of great delicacy.

With their technical dexterity, clever interplay and an intrepid approach to improvisation this band holds your attention throughout.

Michael Tucker - 07 June 2022
Subtitled, somewhat ungrammatically, “Plays The Music of OP & NHØP”, The Touch offers tribute to two of the finest ever in jazz from two of the best in contemporary...