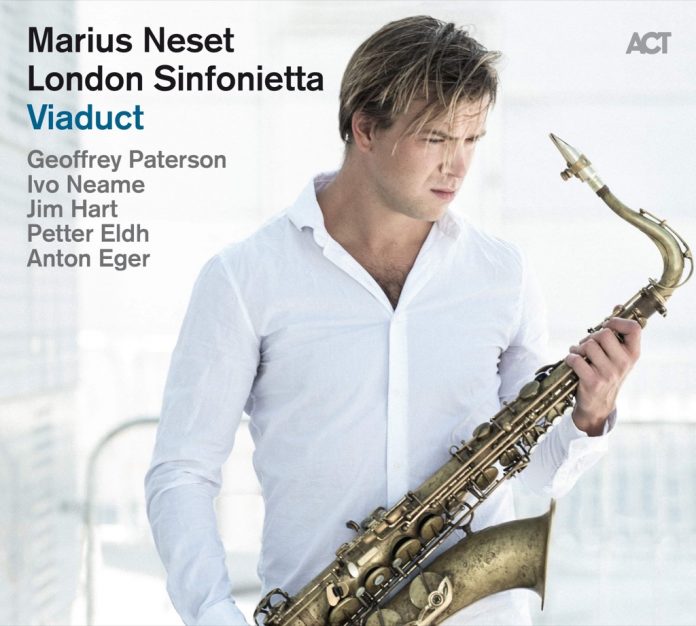 The virtuosity of Norwegian saxophonist and composer Marius Neset has been one of the wonders of the international jazz scene for some years now, and he has never stood still in his creative endeavours.

His articulation on tenor and soprano saxophones is quite astonishing, as he makes huge interval leaps with ease and creates complex structures in frequently long-extended phrasing.

Neset’s recent developments have been in the orchestral sphere, and following the impressive Snowmelt (2016, ACT) this new work takes him deeper into a powerful blend of improvised jazz and contemporary classical music. Actually, Viaduct is his third album with larger ensembles – Lion (2014, ACT), gave him an opportunity to extend his composing skills with the Trondheim Jazz Orchestra.

On the new CD, modern classical influences dominate: many listeners hear elements of the music of Stravinksy and Bartok. But the composer who comes most strongly to my mind in connection with Neset’s writing is the American John Adams, whose punchy rhythmic phrases and dynamic drive are well reflected in both Viaduct and Snowmelt, as well as the Norwegian saxophonist’s small-group work. Adams may, of course, be a subconscious influence, or simply coincidental, but the similarities are striking.

Viaduct is a single work in two parts, opening with dashing phrases from vibes player Jim Hart and the strings, then calming with Neset’s soprano over long phrases from the Sinfonietta. This quickly picks up into the kind of punchy phrasing I described earlier, underpinned by drummer Anton Eger, then alternating between calm passages and rhythmic propulsion.

The musicianship is, as you would expect, at a consistently high level, with Neset’s regular musical companions Hart, Eger, pianist Ivo Neame and bassist Petter Eldh interacting seamlessly with the 19-piece orchestra, conducted by Geoffrey Paterson.

The second track, Part 1b, sees the saxophonist switching to tenor for some typically staccato phrases, then flying off into marvellous multi-note flurries.

The second part of the work, occupying the final four of the 10 tracks, opens calmly with solo cello, evolving into spacious structures for the strings. But this part of the work gives more breathing space to Neset’s jazz quintet, and there are some marvellous moments, with a fine vibes solo from Hart on Part 2a, and thoughtful improvising from pianist Neame on the driving Part 2b. After the lushly romantic Part 2c, the work gradually evolves into a dynamic conclusion on Part 2d, with Neset’s tenor leading the long melodic line.

Overall, Viaduct is a hugely impressive creation, and one wonders what marvels are still to come from the pen of this strongly individual writer and performer. Highly recommended.

Gordon Jack - 04 March 2020
This is an intriguing set of originals by a quartet of top class Toronto-based musicians who are new names to me and probably will be to many of our...

Jazz Journal - 27 January 2021
At one period The Times, that liberal pillar of British society, became unstuffy enough to allow fairly regular, erudite albeit brief reports of jazz events in its columns. But,...