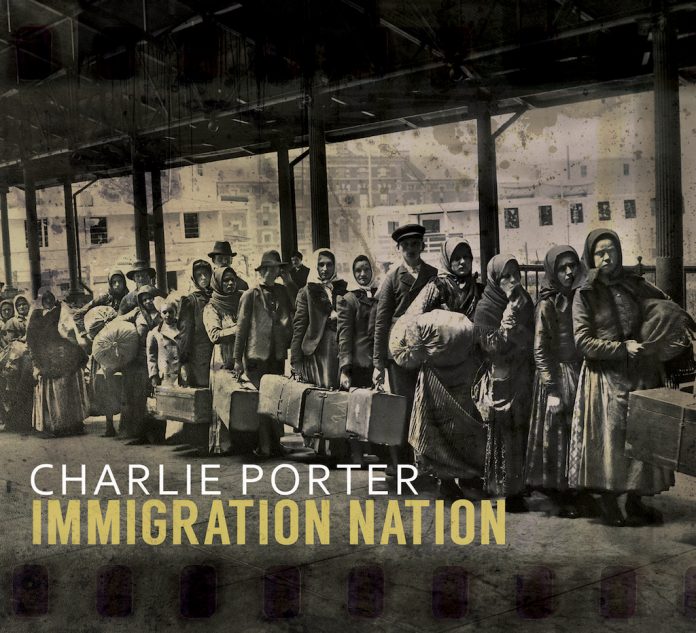 American trumpeter and composer Charlie Porter won first place in both classical and jazz divisions of the United States National Trumpet Competition. Downbeat has described him as a technical wizard. He’s the great grandson of Italian, Greek, Lebanese and British immigrants and to honour his ancestry, Immigration Nation carries a dual message. It celebrates the immigrant history of the United States and it recognises the current struggles experienced by immigrants there. Twelve contemporary jazz compositions are cleverly constructed by Porter to reflect aspects of immigration as depicted by the titles of each number. There are two parts: Leaving Home and New Beginnings.

In the first part, the title track has Afro-Cuban and New Orleans second line rhythms entwining with Spanish and Lebanese elements to reflect the diversity of American society. Contradictions Within has recurring horns and bass licks competing with repeating piano to emulate conflicting ideas of where home is. Divergent Paths has a melody that settles into two separate directions to represent the changes of course that can happen in life. Flight has a fiery tempo and recurring crescendos that evoke running away and a sense of escape. Second Chance uses wide-ranging melody to create a perception of hope and change. The Unexpected has sporadic alterations in tempo to portray the unexpected events experienced by immigrants in their journey.

In the second part, The Privileged Few highlights the divisions between the privileged and underpriviliged in society by fluctuating between two worlds of sound. A New Vernacular refers to the assorted languages emanating from immigration and combines straight time with swing and funk lines to emulate the bringing of something new into the mix. Speedy stop-start phrases in Survival Of The Fittest point to the American Dream as a rat race particularly for immigrants. A Deepening Sense is a contemplative blues and Latin jazz number which represents a strengthening sense of home and family. Belonging has a light, joyful air suggesting a sense of kinship and being home. Chant concludes the album with a choir gathered via social media from different countries singing a message of hope and unity.

This is exciting and dramatic contemporary jazz that at times can sweep to almost symphonic heights. All the members of Porter’s quintet are highly accomplished musicians. They’re given ample space for improvisation throughout and they deliver the music with panache.

Immigration Nation is available from BandCamp, Amazon, Apple Music and Spotify. Links to all of these sites and more info on the album can be found on Charlie’s website.

Dave Jones - 11 October 2020
This is a 2020 Groove Replica re-release of the original 1961 album on Riverside Records – the last that Evans would make with Scott LaFaro, who passed away soon...