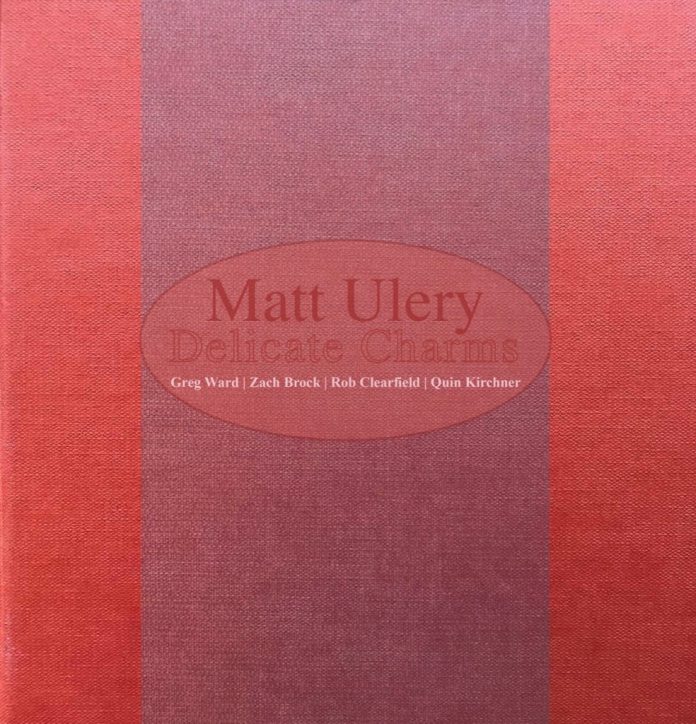 Despite Ulery being based in Chicago, the music of Delicate Charms recalls that very composerly strand of New York jazz from the 1990s which was exemplified by Dave Douglas (New & Used) and Mark Feldman (The Chromatic Persuaders). He borrows liberally from folk and classical musics, and the complementary arts of composition, orchestration and improvisation are given free rein in a music which stands proudly free of any particular school or tradition.

This ensemble made its debut while Ulery was composer in residence at the 2018 Guimarães Jazz Festival in Portugal. On returning to Chicago the group reconvened in the studio, and the session is now released as a beautiful book-bound package which offers a level of desirability that no digital download could ever match. Equally as impressive is Ulery’s chosen set of collaborators – Zach Brock is one of the most sought after violinists in contemporary jazz, Greg Ward is a stalwart of Chicago’s eclectic left-field scene, while both Clearfield and Kirchner are both making waves well beyond the Windy City.

Coping, at over 13 minutes in length, is the disc’s most substantial piece. Almost entirely through composed, it falls into six distinct segments that each convey a different perspective on life’s daily angst. Brock is such an expressive player, and as the melodic lines cascade forth Ward’s keening alto brings a perfect tonal balance. The Effortless Enchantment is a romantic study in five time, garlanded by Clearfield’s carefully measured rhapsodies, while Mellisonant opens with a chorale-like passage, its energies steadily rising as Brock and Ward trade bars.

The Air We Breathe moves with a curious tango-like quality, Clearfield’s cutting solo followed a more wistful outing form Ward. Despite its title Taciturn speaks with an easy eloquence, though the frequent changes of meter do impart a certain hesitance. October reanimates one of the more mellifluous pieces from Ulery’s 2009 album Themes And Scenes, while the closing Nerve features an all too rare bass solo from the self-effacing leader.

Craftsmanship lies at the very heart of this music, evident not only in Ulery’s meticulous attention to detail, but in the ensemble’s selfless pursuit of perfection.