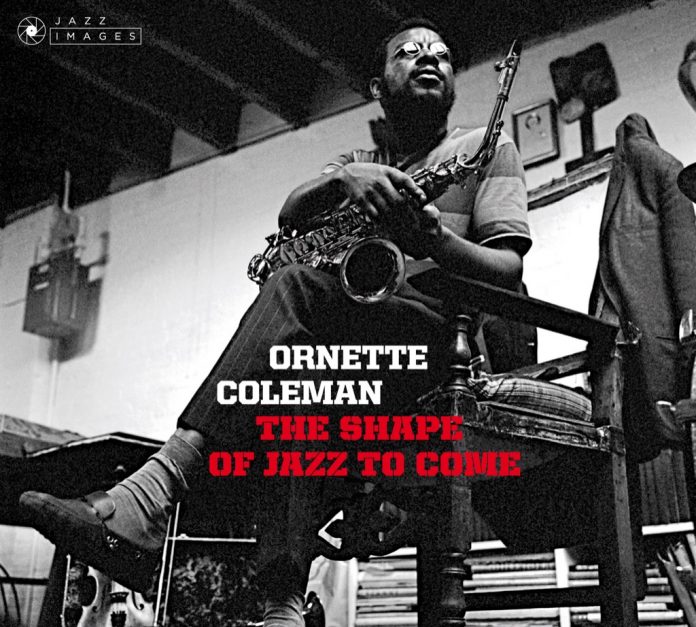 At first, Coleman was viewed as a clown and even described as “all screwed up inside” by Miles Davis. But his legacy grew to shape a generation of jazz performance. Unable at first to afford a brass instrument, he had shaped his sound from a plastic saxophone.

The set focuses not only on Coleman’s legacy but also on some tremendous photography which gives us an insight into how this great art was recorded. It comes from Francis Wolff, who was born in Berlin but left in 1939 for New York where he established himself as a successful record producer. Here we have 10 fascinating photographs of band members – a favourite of mine is Coleman with his son Denardo at Van Gelder Studio, tuning his drums.

An album that demolished conventional concepts of jazz harmony, The Shape Of Jazz To Come has Coleman and Don Cherry taking a different approach to the jazz solo. In an interview talking about this album Coleman said “You’re a human, projecting human emotions. The music should try to be as sincere as you can express, whatever it is that has meaning to you and to people”.

Change Of The Century showcases the ever-growing chemistry between the musicians. Several compositions include idiomatic sax techniques: take, for example, the double-tonguing in Free. Named as the debut release of the Ornette Coleman Quintet in 1958, Something Else!!!! was the only recording where these five musicians were present. My particular highlight is Jayne, a composition named after Coleman’s wife.

This is one for the seasoned collector of music or classic jazz photography, but also a comprehensive introduction for younger listeners and others unfamiliar with Coleman’s innovations.