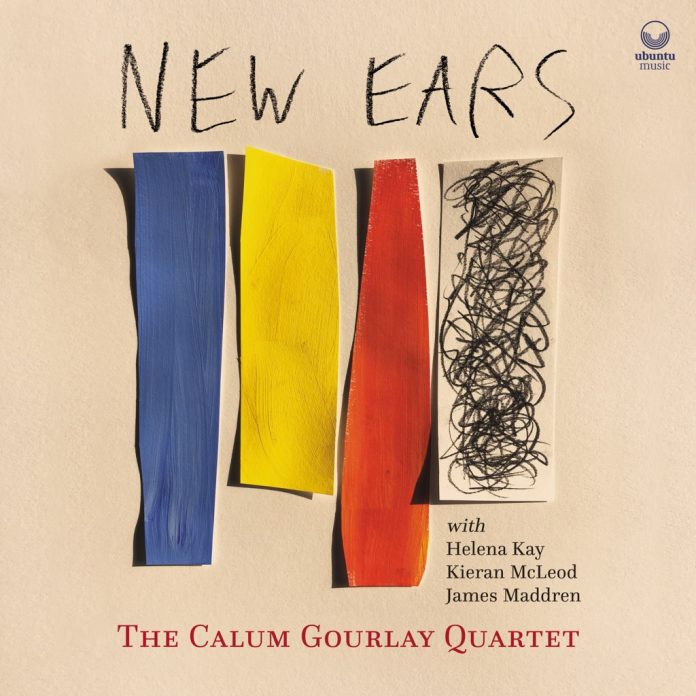 Bassist Calum Gourlay has become a familiar face on the jazz circuit over recent years accompanying the likes of Trish Clowes, Gareth Williams, Kit Downes, Tommy Smith and many others. He’s been a member of the Scottish National Jazz Orchestra for 14 years and he directs his own big band in a monthly residency at London’s Vortex. Gourlay recorded a solo bass album in 2015 and New Ears is his first as a band leader.

Helena Kay, Kieran McLeod and James Maddren are founder members of Gourlay’s big band and and he wrote the tracks for this album specifically with these musicians in mind. Although the pairing of tenor sax and trombone is relatively uncommon, earlier precedents include Stan Getz with Bob Brookmeyer and more recently Chris Potter with Robin Eubanks in Dave Holland’s quintet.

Incidentally, Blue Fugates refers to the Kentucky Fugates family whose genetic disorder turned their skin blue. It’s Gourlay’s stab at penning a blues in a different form to the 12-bar standard. Be Minor centres on a triumphant rallying call by the two horns but this can become a touch repetitive. The rally appears again in slightly different form in the title track and also in Trinity. This unfortunately aids the feeling that some numbers sound a little similar. The track entitled Ro bucks the trend, however, to the extent that unlike elsewhere its refrain hints at an old Western movie theme.Kay’s tenor sax blends well with McLeod’s trombone throughout the album and both deliver masterly passages and intricate solos. Gourlay provides clear and powerful bass lines with consummate ease and Maddren is highly creative on the drums from beginning to end.

I had the opportunity to hear the band in Wakefield whilst they were promoting the album and their live performance was well received. It was interspersed with other Gourlay originals such as Sick Cat which unfortunately didn’t make the album. Gourlay assured us that the cat itself is still alive. FODT (DT being Donald Trump’s initials) didn’t make it either. It’s a pity because both numbers had sprightly rhythms and, to confound expectations considering the subject matter, the latter sounded particularly cheerful.

Betsy Bell - 26 March 2022
Kinetika Bloco, founded by Mat Fox, is a buoyant mix of young brass, woodwind and steel-pan players, a drummer and dynamic dancers. The group sounds like a British carnival...

Jazz Journal - 28 January 2021
Forty years ago, on a jazz pilgrimage to California, Steve Voce observed that the demands of the Hollywood studios meant there were no mediocre musicians on the West Coast. First published in Jazz Journal January 1981