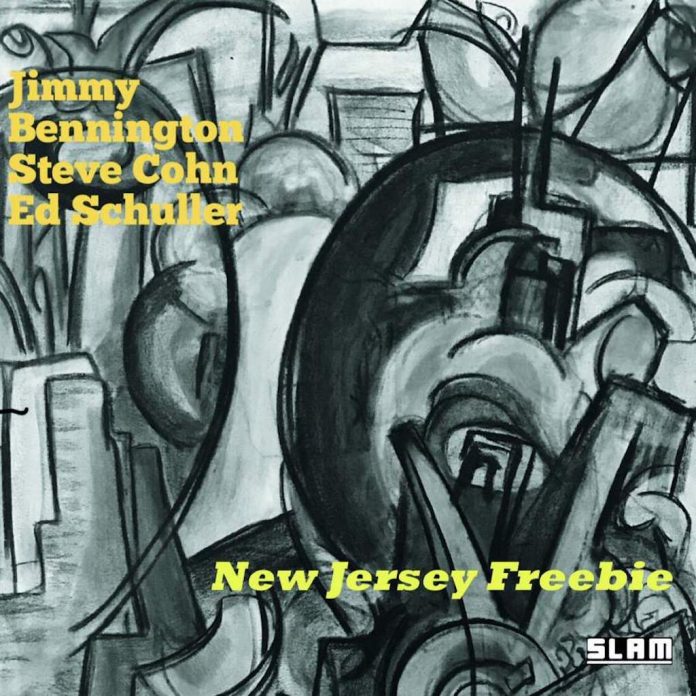 The independent SLAM label, run by multi-reedsman George Haslam, has a catalogue which is nothing if not intriguing and varied, though with a general bias towards the avant-garde (if we can still call it that.) The music on this CD fits that template nicely.

Ed Schuller is the brother of drummer George and the son of composer and music-commentator Gunther, perhaps best-known to jazz audiences for playing French horn on some of Miles Davis’s Birth Of The Cool sessions and as the godfather of “third stream” music, combining jazz and classical techniques. Ed has played with numerous major and minor jazz figures and outfits and consistently contributes solid, constructive elements to any music he is involved with, including this here.

Bennington’s bass drum bears the legend “colour and sound”, which is a fair enough indicator of his approach, though he could add “momentum” as he can whip up a storm when required. I think I first heard Cohn on the 1999 Leo Records album Bridge Over The X-Stream, where he played various Eastern instruments, (including his second love, the Shakuhachi, a Japanese end-blown bamboo flute that he has often used since) as well as piano alongside former Coltrane-bassist Reggie Workman. Here he confines himself to piano. It sounds to me like he’s using an upright rather than a grand piano here but, whatever, the instrument’s rather idiosyncratic tone adds charm to even the most abstract passages.

The two standards that bookend the album get respectful but certainly not reverential treatment. Cohn, who started out playing blues, offers some of his funkiest work on these tracks and on Back To You, which alludes surprisingly to Rodgers and Hart’s Isn’t It Romantic. Like all really interesting music this session reveals more details with successive hearings. Incidentally, the “vocals” credited are in fact just the occasional yell or humming along with an instrumental line … no lyrics.