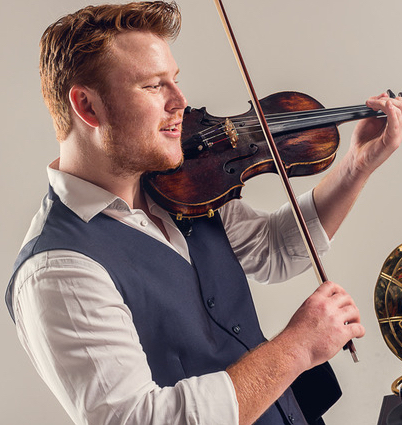 To dispense with my one minor cavil up front: The show was called Salute To Stephane, I was at ringside and didn’t once hear anyone on the stand – or off it for that matter – mention Stephane Grappelli, Django Reinhardt, or even Le Hot Club, and I was able to identify only two numbers – Nuages and Lady Be Good – associated with Grappelli.

They kicked off with a frenetic Lady Be Good and it became clear from note one that Holder is a visual performer; indeed he makes Geoff Eales appear comatose and I for one would pay good money to watch them share a stand and go mano a mano for the Best Mexican Jumping-Bean award. No-one really minded and if anything it seemed to enhance the pleasure of an audience who relished watching this latter-day Pied Piper not so much seducing the rats with his music and leading them to the river as stomping them to death en route.

On a couple of numbers in each set (Lady Be Good, They Can’t Take That Away From Me, Autumn Leaves, Sweet Lorraine, respectively), Holder threw in a vocal, gravelly voice best described as Satchmo-lite but definitely crowd-pleasing.

As the front line Holder and Stringle divvied up the lion’s share of the blowing between them, trading fours one minute, standing toe-to-toe the next but throughout the evening everyone was allowed his moment in the sun and seized on them.

Providing you knew where to look you could, from time to time, see Chris Ingham, serenity personified, smiling from behind his keyboard like a benevolent Mr. Chips, basking in the antics of the Lower Third.

Ben Holder and Julian Marc Stringle: Salute To Stephane, at The Other Palace, Palace Street, 30 May 2019.

Thomas Fletcher - 25 April 2020
“An instrumentality that connects. The process of bringing ideas or events together in memory or imagination”. This rather poetic statement sits alongside the album title reminding us what the...