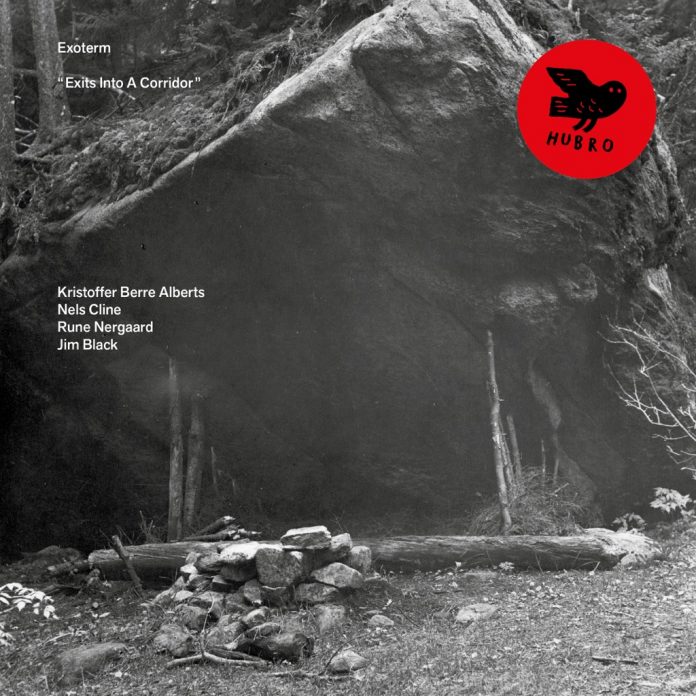 In layman’s terms an exothermic reaction is one in which considerable heat is released as different elements react and combine into a new compound. Describing a process of interaction, release of energy and spontaneous transformation, the conceit behind the group’s striking name could easily fit any number of improvising ensembles. Yet there is something particular in the frequent changes of temperature and the seemingly endless cycle of breakdown and renewal that makes it the perfect moniker for this combustible Scandi-US collective.

Recorded over two days in Brooklyn in January 2019, what Exits Into A Corridor may lack in playing time is definitely outweighed by the power of its punch. Exoterm’s Scandinavian axis consists of saxophonist Kristoffer Berre Alberts (Cortex) and bassist/composer Rune Nergaard (Bushman’s Revenge), and their paths have crossed many times since their student days in Trondheim. Nels Cline by now needs little introduction, a versatile guitarist whose work spans alt-rock (Wilco) to mainstream jazz and the avant-garde, while Jim Black (Tim Berne, Alasnoaxis) is quite simply one of the most consistently exciting drummers to have emerged in the last 30 years.

Forest Mist pits Alberts’s squally sax against a hypnotic and almost shamanic beat, the energies steadily rising until Cline’s grungy bridge heralds a slow decay. Back Towards The Car fuses the raw energy of punk with the motoric rhythms of Krautrock, and it’s very different in tone to the almost dreamlike vignette Moves Away From The Door. The set’s most bruising and confrontational exchanges are saved till last, with the menacing rhythmic undertow of Two More Times and exhilarating post-apocalyptic onslaught of Manufacturing A Smile detonating immediately on impact.

Exits Into A Corridor is certainly not for the faint of heart, but Exoterm’s joyous noise bears the unmistakeable stamp of authenticity and is well worth the effort.

Click here to buy Exoterm: Exits Into A Corridor

Derek Ansell - 27 April 2019
Pianist Asherie covers music from Louis Armstrong to Charlie Parker and Dizzy Gillespie on this release and throws in some Spanish music and Autumn Nocturne for good measure. With a...