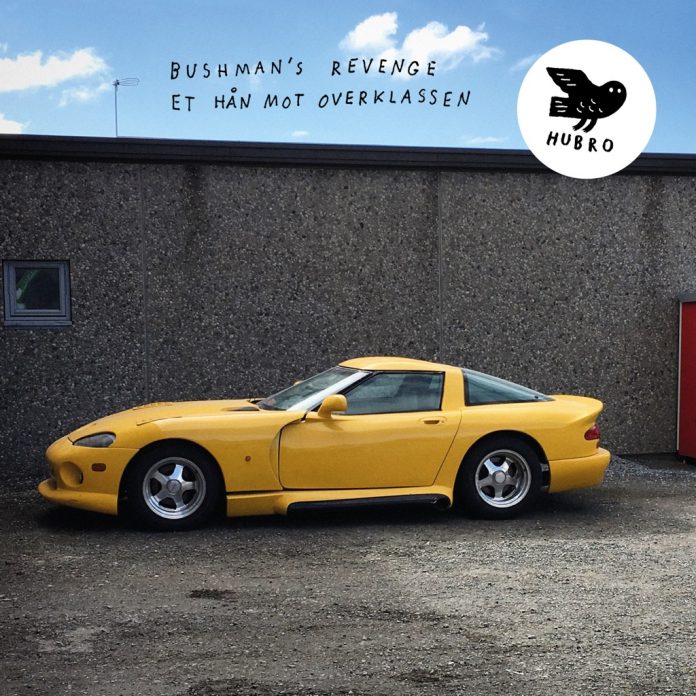 Et Han Mot Overklassen – which translates to “A mockery of the upper class” – is the perfect soundtrack to a film that does not exist. The use of electronics, pedal effects and cymbals on tracks such as Folk Kremtar No Av Og Til Berre I Lause Lufta Og and The Curious Case of The Resting Blue Steel Face create an ominous and sometimes even threatening atmosphere that wouldn’t sound at all out of place as a score to the latest Scandinavian noir – And Ladies Night At The Jazz Fusion Disco is far from the fun and light tune that the title suggests.

These pieces, for all their atmosphere, don’t offer much in the way of melodic interest. The best grooves emerge when Even Helte Hermansen delivers distorted and reverberating blues improvisations over Rune Nergaard’s repetitive bass riffs. In other instances, the music strikes a much more serious note with comparatively sombre and melancholic melodies. In Toten, Hermansen’s guitar chords and quivering solos glide over a rolling floor-tom rhythm. Here again, the music carries a distinctive cinematic quality – like a dramatic funeral dirge, or the build up to a spaghetti western’s inevitable climax.

By layering electronic effects and additional instruments – a range including the vibraphone, organ, toy piano and drone – on top of the traditional trio setup, Bushman’s Revenge achieve a very impressive sound. But for an album that describes itself as “like Cream playing Coltrane (Alice or John), remixed by Arne Nordheim or Karlheinz Stockhausen”, Et Han Mot Overklassen is a rather understated record. It isn’t so abrasively in-your-face, but it still succeeds at creating a great sense of atmosphere and ambience.

Fred Grand - 12 March 2022
Formed in the mid-90s when the musicians were still teenagers, the Joona Toivanen Trio has been quietly expanding the vocabulary of the piano trio for the better part of...

Jazz Journal - 26 June 2022
This is one of a series of taped interviews with musicians who are asked to give a snap opinion on a set of records played to them. Although no...