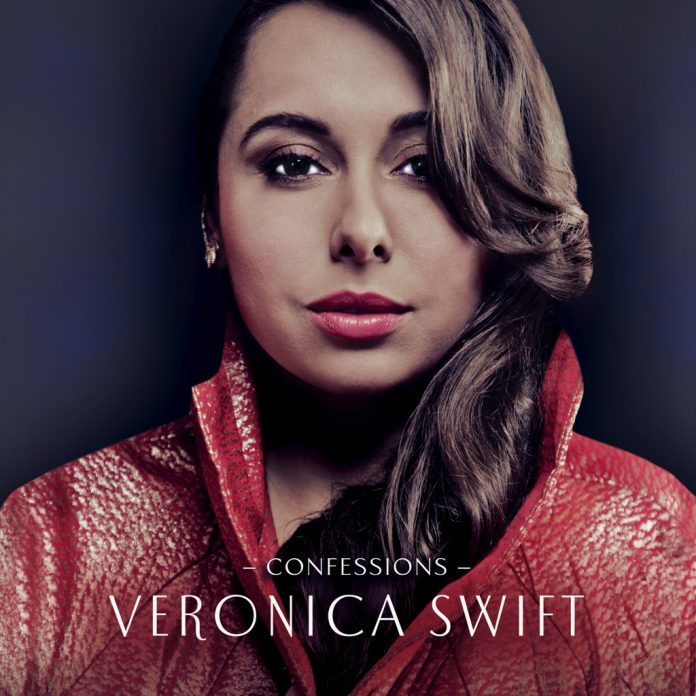 An exceptionally talented jazz singer (in the real sense of that much-misused term), Veronica Swift has gathered plaudits and a growing audience over the past few years.

Among her achievements are an appearance at Women in Jazz at Dizzy’s Club Coca-Cola before she was in her teens; her first album at age 13; second place in the Thelonious Monk Competition at age 21; a bachelor’s degree in jazz voice at age 22. In addition to singing, she also composes, her works including Vera Icon, a gothic rock opera, written when she was a student at University of Miami’s Frost School of Music, and one of the songs heard here, I Hope She Makes You Happy, for which she wrote words and music.

The source of this precocious talent might well be both nature and nurture, all stemming from her parents, pianist Hod O’Brien and singer Stephanie Nakasian, under whose wings she developed. Indeed, on her debut release, 2007’s It’s Great to Be Alive, she was accompanied by her father’s trio along with Richie Cole.

This background might also account for her choice of songs on this new release. Apart from that one original, they are a fine selection of lesser-known songs, some of them coming from front-rank sources. For example, there are two songs with lyrics by Dave Frishberg, A Little Taste (music by Johnny Hodges) and I’m Hip (music by Bob Dorough), Mel Tormé’s A Stranger In Town, Pete Rugulo’s Interlude, and You’re Gonna Hear From Me, by André and Dory Previn. In her approach to all these songs, Swift displays complete confidence in her vocal powers, singing with authority and maturity. Her phrasing is exemplary, as is her rhythmic understanding, both demonstrated with flair on No Not Much, a duet with bassist Russell Hall.

Usually, in reviews I avoid comparisons with other singers, especially the big names from the past. Partly, this is because it’s lazy and partly because it tends to imply that the new kid on the block is a copycat. Well, I’m about to break my own rule and raise the name of Anita O’Day. Not because Swift is copying O’Day’s style, but because throughout this album her command – rhythmically, melodically, lyrically, as well as her intelligent use of scat – brought back memories of early O’Day.

An excellent album by a major figure in the world of jazz singing. And she’s still only 25 years old.

Roger Farbey - 14 September 2019
Anyone insouciantly dismissing Rubberband as just another cashing-in exercise amongst a swathe of “lost” recordings should do so at their peril. This is certainly not the case. This recording...