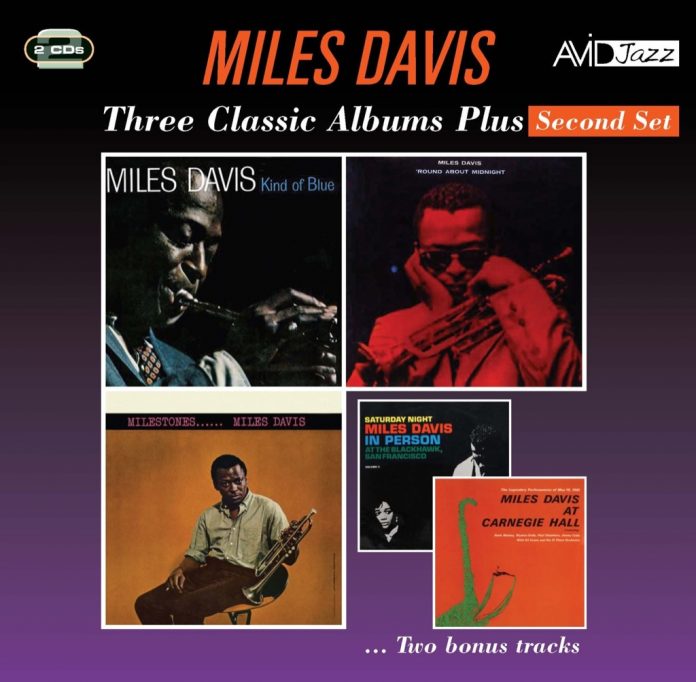 Miles Davis famously explored ’Round Midnight with the composer during an unscheduled appearance at the 1955 Newport Jazz Festival. That performance can be found on Jazz Unlimited JUCD 2050 and enthusiastic reviews in the musical press heralded a come-back after some difficult years in the early 50s. An exclusive contract with George Avakian at Columbia Records was the result which allowed him to form a regular working group and the opening six titles here were Miles’ first for the label.

At Avakian’s request he revisited Monk’s classic in a dramatic arrangement that is rumoured to be the work of Gil Evans. John Coltrane announces his entry here with a clarion-call that adds to the drama of the performance.

Miles premiered Ah-Leu-Cha in 1948 with Charlie Parker. It has a contrapuntal form similar to Parker’s Chasin’ The Bird, which also featured Davis a year earlier. It is notable for some explosive punctuations from Philly Joe Jones during the thematic sections. Always willing to look outside the bop repertoire for fresh material he performs All Of You and Bye Bye Blackbird with his introspective harmon mute sound which became something of a trademark.

The irrepressible Cannonball Adderley was added to the group for the Milestones date. It opens with Dr. Jekyll, a fast blues at 80 bars to the minute which features exciting exchanges between Cannonball and Coltrane. Sid’s Ahead – another blues but much slower – has an interesting provenance. Similar to Miles’s Weirdo, both tunes are derivatives of Walkin’ which is a contrafact of Jimmy Mundy’s Gravy. Apart from playing the Two Bass Hit theme with its hint of Salt Peanuts the leader sits out, allowing the saxes to do their own very considerable thing. Straight No Chaser is notable for the way Red Garland quotes Miles’ solo from his 1945 Now’s The Time recording with Charlie Parker in its entirety. Just as an aside, Jon Hendricks wrote a lyric for this solo which was performed by LHR. I remember buying an EP and playing Milestones on a daily basis – it seemed so fresh and new back in 1958 – as it still does today. The fragile beauty of Miles’ performance here is one of his best from the era and I’m surprised that someone like Hendricks or Eddie Jefferson never added a lyric to this solo.

The modal format was to be more fully explored on Kind Of Blue, an album that has been the subject of books by Ashley Kahn and Eric Nisenson. It was a profound and historically important recording that moved the music away from chordal tram-lines to the relative freedom of modes.

Barry Witherden - 31 December 2020
Amongst the many grim things that 2020 will be remembered for, the passing of Keith Tippett will have left an especially poignant void even for many of us who...