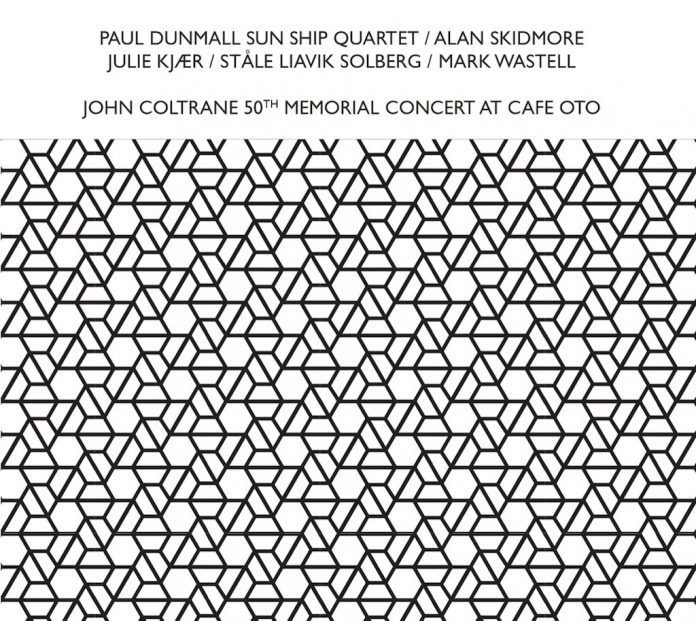 Recorded 17 July 2017, exactly 50 years after Coltrane’s death, this gig was organised by a small number of Coltrane enthusiasts, including percussionist Mark Wastell. He selected several musicians to perform, including Paul Dunmall and his Sun Ship Quartet and saxophonist Alan Skidmore. Skidmore saw Coltrane perform in Walthamstow, the last of only seven shows he played in the UK, and he, like the other musicians here, has been greatly influenced by Coltrane.

The show consists of seven tracks, six of which are Coltrane’s own compositions. The opening song on the first disc is an original based on Coltrane’s 1967 To Be, on which he unusually plays flute. With Julie Kjær on flute, and percussion from Ståle Liavik Solberg and Mark Wastell, the piece is a 20-minute improvisation with a sporadic rhythm and dynamic melody.

After that original, the show included the entire programme of Coltrane’s Sun Ship album, posthumously released in 1971, and a cover of Ascension. The rest of the first disc is made up of three tracks from Sun Ship, played by the Paul Dunmall Sun Ship Quartet. The original album featured the classic Coltrane line up with McCoy Tyner, Jimmy Garrison and Elvin Jones. Dunmall’s quartet replaces piano with a second tenor saxophone and throughout the songs the two take turns improvising, demonstrating their different interpretations of Coltrane’s compositions.

On the second disc, the Paul Dunmall Sun Ship Quartet is joined by Alan Skidmore to perform the final two tracks from Sun Ship, Attaining and Ascent, before the finale which sees all musicians return to the stage for a performance of the legendary Ascension.

Memorial Concert captures an excellent performance, and the passion for Coltrane’s music and the effect it has had on generations of musicians can be heard throughout these interpretations of his work. Clearly, even though he died 50 years ago, Coltrane’s music is still as thought provoking and as inspirational as ever.

Brian Morton - 13 October 2020
Time slows down with the absence of heat. You have this direct from the great physicist Carlo Rovelli, but it’s one of the ideas behind the title track here....