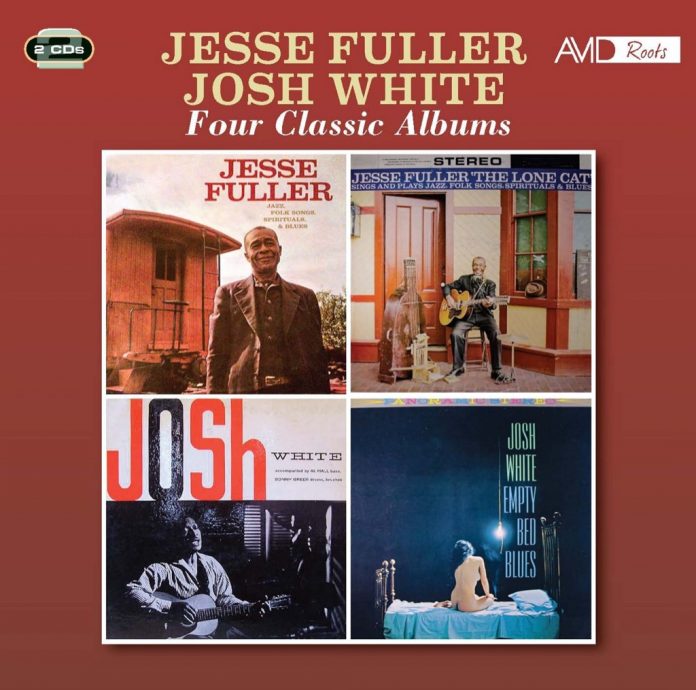 Avid’s latest release in its Four Classic Albums series pairs the rough and ready Jesse Fuller with the smoother, more stylish, Josh White: two solo albums from Fuller, plus two small combo records from White. Neither man quite reaches the heights of Elmore James or Lightnin’ Hopkins – both on recent Avid packages – but they have their own recognisable styles and these CDs showcase an eclectic mix of songs including a few jazz standards.

Fuller, in his 60s at the time of these recordings, is the more extrovert performer, White the more laid-back and relaxed. Fuller was a one-man band: 12-string guitar, harmonica, kazoo and cymbals, plus the fotdella (which the sleeve notes call a “fordella”), an instrument of his own creation that’s essentially a foot-operated standup bass. The result is a fuller (sorry) sound than White achieves on his trio and duo sets.

The first of White’s albums, Sings Ballads-Blues, is notable for the presence of Al Hall on bass and Ellington stalwart Sonny Greer on drums. Familiar songs include Miss Otis Regrets, Midnight Special and the legendary Gloomy Sunday, on which Hall’s droning arco double bass establishes a musical atmosphere that echoes the doomy lyric.

Empty Bed Blues is mostly a duo album, with Bill Lee on bass, and focuses on blues rather than mixing in a few jazz standards. It’s all the better for this approach: White sounds more comfortable with the song selection and gives a more involving performance. Baby Baby Blues adds uncredited instruments (piano, drums and clarinet), giving the track a jazzier feel than the rest of the album.

Fuller’s performances are earthier than White’s and sound more spontaneous. He tackles Tiger Rag like he approaches most of these songs – head on in roaring, high-energy style. It’s a typical Fuller performance even if the song is not typical of his repertoire and it sums up the difference between the men as demonstrated on these albums. White’s style is urbane, smooth, even when he’s singing traditional blues. Fuller’s having fun, putting his heart and soul into each song for the sheer hell of it. White comes across as the more accomplished singer and instrumentalist, Fuller as the guy most likely to keep the party going until dawn. As a result, Fuller’s albums take the entertainment honours.

Steve Voce - 15 June 2019
It’s good to hear Billy Byers doing a fair bit of soloing, and he’s revealed as a very close disciple of Bill Harris. He’s also the author of the...