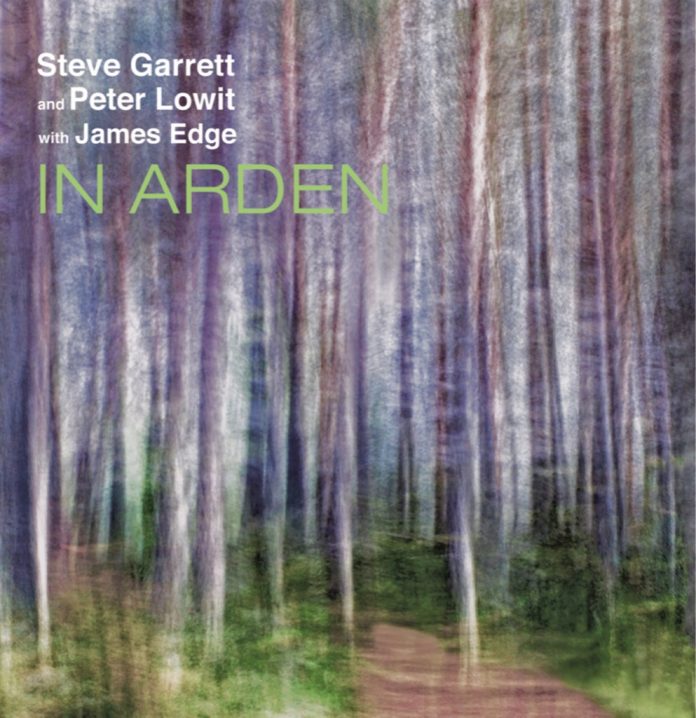 This four-track EP of acoustic guitar and double bass from the Scotland-based duo of Garrett and Lowit – augmented by string quartet on In Arden – is an attractive and readily accessible collection of tunes.

The duo name-check Danny Thompson and John Martyn, Ron Carter and Jim Hall, Niels-Henning Orsted Pedersen and Joe Pass, and Charlie Haden and Pat Metheny as previous practitioners of the guitar/bass art, but none of those legendary pairings are too obviously reflected in the sound of Garrett and Lowit as shown here: Thompson and Martyn at their most relaxed is perhaps the best point of comparison.

The remaining three duo tracks are lower-key affairs, allowing Garrett’s precise acoustic guitar picking to come to the fore (although at times string rattle from the bass becomes distracting). Of the three, Mr CC – dedicated to the virtuoso but under-appreciated guitarist Clive Carroll – is especially enjoyable, its faux-medieval melody reminiscent of The Sallyangie’s Midsummer Night’s Happening (which featured Ray Warleigh on flute).

In Arden is a brief insight into the work of this duo and makes the prospect of a longer release one to look forward to.

In Arden Is available from Birnam (CD), Amazon,  iTunes , Google Play or Spotify.  Find out about Steve Garrett’s other projects on his website.

Derek Ansell - 25 March 2019
Subtitled "The Charlie Mingus Jazz Workshop", this early Atlantic session in 1955 was one of the first of the bassist-composer’s workshop styled programmes. Starting in 1953 Mingus gathered together...