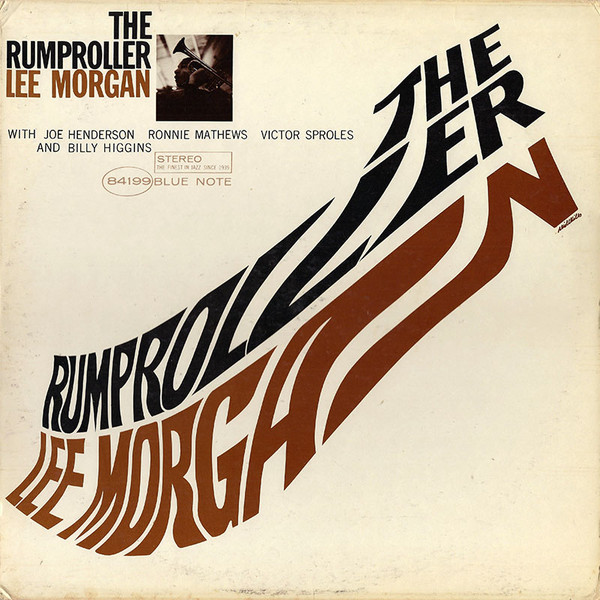 Rumproller, here in a new vinyl reissue, was the follow-up to Lee Morgan’s 1963 hit album The Sidewinder. Sidewinder actually reached number 35 in Billboard’s Top 100 and Blue Note could barely cope with the demand. It became his best-selling LP and Sidewinder was used on the soundtrack for an automobile advertising campaign making a big difference to his personal finances. As Leonard Feather said, “It became a happy event for good music”. Although only a sideman at the time with Art Blakey, the billing quickly became “Art Blakey and the Jazz Messengers featuring Lee Morgan”.

Rumproller has the same instrumentation and Blue Note’s Alfred Lion was keen to replicate the Sidewinder success. Andrew Hill was asked to compose an original with a similar rhythmic feel and Rumproller gets pretty close with its boogaloo rhythm together with the same extended blues structure – 24 bars instead of 12. Hill was associated with the burgeoning avant-garde movement but he had worked as a young man with the hugely popular Paul Williams R&B band. His Rumproller has all the right soul jazz elements which are reflected in Morgan’s and Joe Henderson’s choruses.

The leader’s powerfully exuberant sound, very much in the Clifford Brown mould, is a delight throughout especially on his own Eclipso and The Lady (dedicated to Billie Holiday) where his use of a harmon mute adds to the drama and intensity of his performance. Joe Henderson, who was also on the Sidewinder date, is an ideal foil and he is mightily impressive on Desert Moonlight and on Wayne Shorter’s Edda.

Jeffery S. McMillan’s biography of Lee Morgan – Delightfulee – hints at some difficulties that occurred on the date but these problems are not apparent on a reissue that can be recommended.

Ian Lomax - 17 July 2021
Big Joe Williams is not the biggest name in the history of the blues but he is an important name. He bridges the period from the early delta blues...