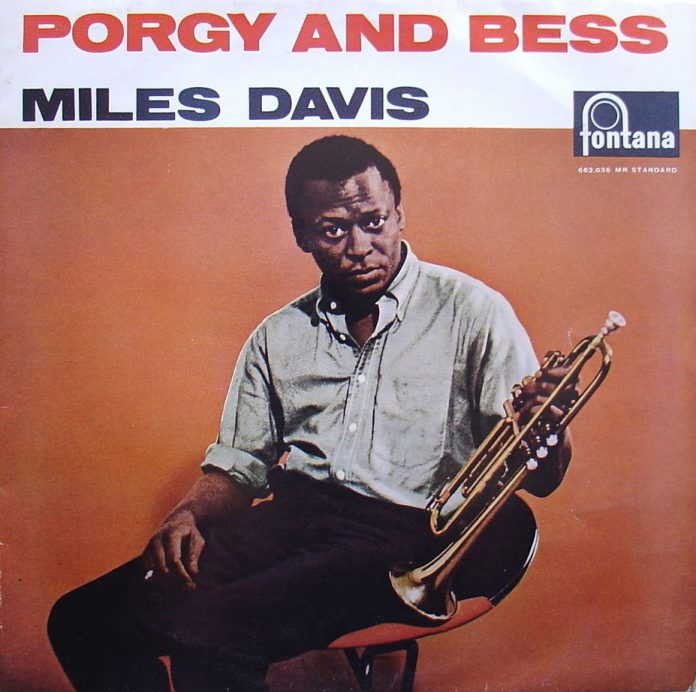 Before sitting down to write this re­view I have been playing this record for the sixth time – and it moves me more each time I hear it. Each playing has revealed subtleties that I have missed before; this is a performance that can and will give pleasure for years to come.

Those who know the remarkable “Miles Ahead” record will know what to expect. This is another outstanding collaboration between two of the greatest talents in jazz: trumpeter Miles Davis and arranger Gil Evans, who also con­ducts the orchestra.

It is, of course, a modern jazz treat­ment of George Gershwin’s famous folk-opera, but, as Charles Edward Smith points out in his excellent sleeve notes, it is not merely a jazz treatment; it is an orchestral approach to the vocal score. The blues-jazz inspiration is already present in the music … “It occurred to Gil that not only were Miles and himself contributing to an interpretation of the score in terms of orchestral jazz but Gershwin himself was creating anew as jazz ideas, always latent in his scores (as well as expressed), came to life. Gil said: ‘The three of us, it seems to me, collaborated in this album’.”

Anyway, the whole thing is remark­ably well done. Whether on trumpet (mostly muted) or flugelhorn Miles plays imaginatively with a beautiful tone and a pure, lyrical quality. The voicing of the other instruments (there are a lot of other talented jazzmen in the orchestra!) is breathtaking in its beauty.

There are so many wonderful things in this album that it is impossible to describe them all. The astonishing effect achieved by brasses, tuba and French horns on “The Buzzard Song”… the use of flutes on “There’s A Boat” … Miles’ wonderful solo work on “Summer­time” … the jazzy flavour of “It Ain’t Necessarily So” and “Gone”, which is an improvisation by Miles, Paul Chambers, and Philly Joe Jones on an improvisa­tion by Evans on the spiritual, “Gone, Gone, Gone”!

This is modern jazz at its best but it also has all the humour and pathos of some of the finest music ever written. Don’t let this record go by.
Kennedy Brown

Jazz Journal - 27 March 2022
Gerry Mulligan can do no wrong these days in public estimation, but it has always seemed to me that he is vastly overrated. Nothing happens here to change this...