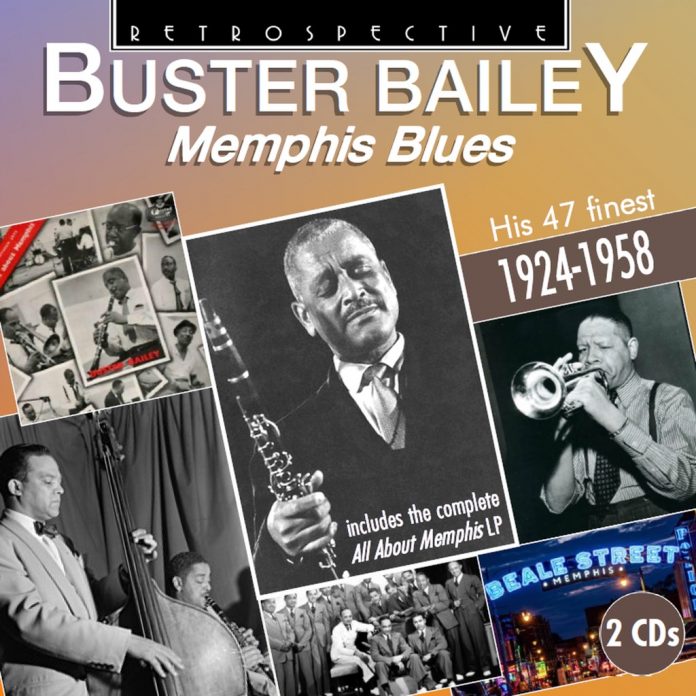 Buster Bailey was one of those unfortunates, like Lucky Thompson, who was inexplicably neglected by the cognoscenti. Although in Buster’s case there was some excuse in that, although he was a virtuoso, compared to Bigard and Goodman, the dimension of emotion in his playing tended towards miniscule. However, the powerful collective impact of this collection of his best work must cause many to rethink, for this is a formidable jazz album, packed with mainstream improvisation and jazz skills. Many of these tracks appeared on Classics 904 where the sound would have been inferior. Here it has been impressively reclaimed.

Bill (it’s not known when he became “Buster”) showed great skills as a conventional clarinettist when he was a boy and he came to Chicago via W C Handy’s band where “I was embellishing around the melody. At that time I wouldn’t have known what they meant by improvisation. But embellishment was a phrase I understood”. He embellishes the hell out of many of the masterworks here. In Chicago he began his studies with the masterful Franz Schoepp some time before Goodman enrolled wit the same tutor.

The opening Rhythm Busters tracks pre-date the John Kirby band, but three of the future members are already here, and Bailey’s solo work is every bit as satisfying as that of Newton and Brown. The lurch back to Santa Claus and 1924 is startling. Buster dominates whilst his life-long friend Louis takes a back seat for once. By now a skilled Henderson musician, Buster’s work, articulate and suave, doesn’t really fit with Bessie’s.

Bailey stood out amongst the Henderson team, being more sophisticated than Hawk, Ladnier and Benny Morton and it’s not until the 1934 band and its Red Allen derivative that he has proper competition. By Shanghai Shuffle the company is more conducive. Allen, Benny Carter and Higgy make Buster sound a bit spidery by comparison. There’s a nice balance of solo and band and the arrangements are well written (presumably by Buster).

1936 was a good year for everyone including Chu Berry, and he dominates Stealin’ Apples (where Buster’s comparatively thin tone shows why he was never able to be Henderson’s Bigard). Blues In C Sharp Minor and Warming Up deserve their classic status. That opening conversation on the blues between Teddy Wilson and Israel Crosby is one of the finest in mainstream jazz, Bailey is at his career best, and Eldridge and Chu have no intention of dropping the ball. Buster’s sextet is a renamed John Kirby band. The Kirby band’s St Louis Blues had unbelievable clarinet skills that knocked us out when we were schoolboys and it was here that Buster introduced the world to circular breathing (still one of the best examples).

And so the classics roll in with Hawk and Nat Cole gigantic on You Can Depend, until, on the second CD, Buster’s 1958 album is reached. This is an imposing showcase for a clarinettist who had recorded too little as soloist or leader, and he is supported in various-sized groups by Herman Autrey, Vic Dickenson, Hilton Jefferson and the largely unloved Red Richards, who seems to have been an associate of Buster’s.

Buster joined Louis’s All Stars in mid-1966. He recorded with them, but I haven’t heard any results. He died whilst still with Louis on 12 April 1966.

Derek Ansell - 25 May 2020
With the first LP Ella And Louis, Norman Granz of Verve Records knew he had a winner, so a follow up disc was pretty much inevitable.

John White - 14 April 2019
From his initial and life-enhancing discovery of jazz, poet Philip Larkin’s love of Louis Armstrong (1901-71) was expressed in broadcasts, correspondence, record and book reviews. As the...

Steve Voce - 18 May 2020
One day in the early 50s, Bill Harris, Victor Feldman and Bobby Lamb were walking along Broadway when they met Henry Coker, Benny Powell and the third...

Betsy Bell - 16 October 2020
Kenneth Smith has a brilliant new approach to understanding chromatic music. To grasp it, an academic background in music but also in philosophy...

Straighten Up And Fly Right: The Life And Music Of Nat...

Jazz Journal - 03 August 2020
Morrissey-Mullen Band / Holdsworth and Co / Paraphernalia Starting with Morrissey and Mullen, the programme seemed destined to a warm response, and although...

Derek Ansell - 29 April 2019
This TV show, made 10 December 1959 for the ABC Television network, was intended as an outside broadcast but fell on a rare rainy day in Palm...